The Isle of Adventure (Table of Contents) 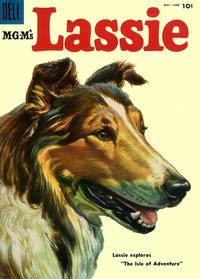 The Flying Wolf (Table of Contents: 2)

Job Number
LASSIE #22-555
Genre
animal
Characters
Lassie; Gerry; Rocky
Synopsis
Lassie plays with a group of howler monkeys, which afterwards run off with Rocky's camera, and a harpy eagle flies off with the young howler monkey. Lassie to the rescue.
Reprints

Pencils credits for this issue from Overstreet and Jerry Bails. Inks identification by Alberto Becattini (December 2010).

The Nature Lover (Table of Contents: 3)

Genre
animal
Characters
Lassie; Gerry; Rocky; Timbu; Dr. Blithley
Synopsis
Dr. Blithley of the National Botanical Institute arrives at the homestead to get some specimens from the jungle. He is pursuaded to take Timbu and Lassie with him on his day trip into the jungle.
Reprints

Art on this story was previously stated here to be by Matt Baker/Ray Osrin, but it is clearly by a different artist.

The Isle of Adventure (Table of Contents: 4)

Genre
animal
Characters
Lassie; Gerry; Rocky
Synopsis
Lassie and her friends explore an island off the coast of Peru.
Reprints

Story ends on back cover. Inside back cover in black and white.
In the second panel Rocky says "The Humboldt current comes up from the Atlantic...". This should be "... from the Antarctic...". On the first panel of page 5 a few words lettered by hand suggests that another error has been corrected. Inks identification by Alberto Becattini (December 2010).