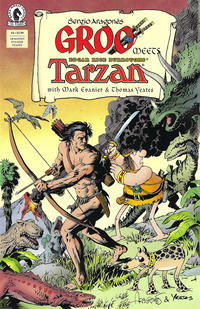 First Line of Dialogue or Text
Tarzan artist Thomas Yeates teams up with Sergio Aragonés, Mark Evanier, and the rest of the Groo crew to deliver a unique crossover experience between the Lord of the Jungle and the Cheese Dip Barbarian!
Characters
Groo; Tarzan [Lord Greystoke]
Synopsis
Introduction and credits for the issue.
Keywords
credits; introduction

Color on inside front cover.

Tarzan's chimpanzee is unnamed in this story.

GOOD BITS: Groo leads the warriors of Ungara (of Groo's world) to help Tarzan battle the slavers (of Tarzan's world):

SLAVER (looking aghast at the band of Sergio Aragonés-designed warriors): "What kind of beings are these UNEARTHLY CREATURES?"

WARRIOR (looking equally aghast at the realistically-rendered slavers): "What are these BEASTS? They resemble NO MEN we have ever seen!"
------

TARZAN (on Groo and Rufferto's fighting prowess): "Whatever he is, the smelly one fights like a demon! So does what I gather is a dog..."
------

The army of cosplayers, crowded in their various vehicles and bent on rescuing Sergio Aragonés, crash through the entry barrier at the Safari Land entrance ticket booth:

TICKET TAKER: "You can't come in here! Not unless you pay me SIXTY BUCKS EACH! ...And we charge DOUBLE for Batmobiles!"

COSPLAYER: We're COSPLAYERS! We don't have any money - or pockets!"

First Line of Dialogue or Text
You hold in your mitts the last issue of the four-part Groo Meets Tarzan series... but do not despair.
Feature Logo

Mark's declaring that another reader's letter was not printed in this issue "Because I had to run Gareth Gaudin's letter twice, I have no room in this issue for yours." - in response to that very same letter.

A suggestion that a cat be added alongside Rufferto, as another traveling companion to Groo - from a reader's cat. And questions from a father and two daughters from Albuquerque, NM, all of whom read Groo.

Rufferto [lower-case letters]
Genre
humor; anthropomorphic-funny animals
Characters
Rufferto; elephant; lots of other animals
Synopsis
In a teeming jungle rain, Rufferto hopes to stay dry by stationing himself beneath the huge body of an elephant, but he finds that too many other animals have gotten there first.
Keywords
dog; elephant; jungle setting; rain; unwelcome surprise