Cover code: 90069-805. With this issue, the Popeye title returns to Western Publishing (Gold Key and Whitman Comics) after more than a decade at King and Charlton Comics. The last of the prior Western/Gold Key run was issue number 80, with a cover date of May 1966. The issue numbering for the Popeye title remained consecutive and unbroken through Dell, Gold Key (Western, 1962 Series), King, Charlton, and Gold Key/Whitman (Western, 1978 Series).
This issue has variants:
Keywords
change in publisher

[The MEAL-ing’s Mutual!] (Table of Contents)

Genre
humor
Characters
Popeye the Sailor; buzzard
Synopsis
On the desert, Popeye and a buzzard eye each other as their likely next meal.
Reprints
Keywords
buzzard; desert setting; hunger; intimidation; one-character-desiring-another-as-a-meal 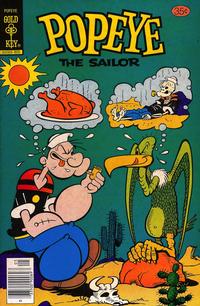 "On the Trail of the Lonesome Prospector" or "Once Upon a Popcorn Popper in the Land of Sand on a Cactus Built for Two" (Table of Contents: 1)

Job Number
783
First Line of Dialogue or Text
Popeye the Sailorman is enjoying a day in Central Park...
Feature Logo