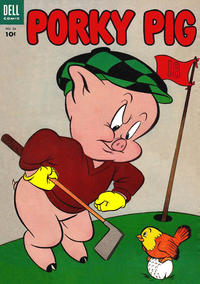 Black and white on inside front cover. Pantomime story

[Petunia Had a Little Lamb] (Table of Contents: 2)

Job Number
P.P. #34-545
First Line of Dialogue or Text
Oh, please, Lambie! You've got to learn to follow me... Not Porky!
Genre
anthropomorphic-funny animals; humor
Characters
Porky Pig; Petunia Pig; Cicero Pig; Sylvester; Bugs Bunny; Elmer Fudd; Lambie (lamb); wolf; costume party goers; costume party judge
Synopsis
Petunia is dressed up as "Mary had a Little Lamb" for a costume party, complete with lamb. But the lamb runs away in the woods and while hunting it, Bugs, Elmer, and Porky are trapped in a cabin by a wolf.
Reprints
Keywords
contest; costume party; lamb; prize; wolf

[Who Haunts the Haunted House?] (Table of Contents: 3)

First Line of Dialogue or Text
As agent for the Peachy Realty Company, I recommend this property -- just sign here, Petunia!
Feature Logo

This story has sharper-than-usual dialogue (with Cicero showing a healthy amount of sarcasm toward real estate agent Porky’s zealously pushing the sale of the old house to Petunia), animation-style scare takes and reactions, as well as the use of the parody name “Frankincense Monster”, which was used in Warner Bros. cartoons.

Cicero continues the spirited characterization seen in the previous story, suggesting the same writer for both stories. The reactions of the incidental characters to Porky’s inexplicable and uncontrolled flight presage similar reactions by incidental characters to oddball situations in the Hanna-Barbera cartoons of the late-1950s thru mid-1960s – of which Michael Maltese was a primary writer. Maltese would return to this idea in the Augie Doggie cartoon “Whatever Goes Pup” (1959), with Augie inventing the flying formula and testing it on poor old Doggie Daddy.

Black and white on inside back cover. Pantomime story.

Color on back cover.