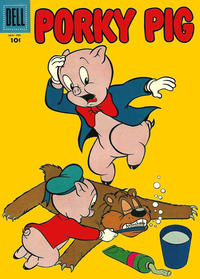 Black and white on inside front cover. Pantomime story.

Porky Pig and the Desert Marauders (Table of Contents: 2)

Don R. Christensen's original title: "Mistook for Martians", from his notes. The two lead rocket scientists are drawn by Fred Abranz to look more realistic than his more typical cartoony humans, such as the cowboys and desert bandits. They are very likely caricatures of actual persons.

[It Shouldn’t Happen to a Turkey!] (Table of Contents: 3)

Posing a Problem (Table of Contents: 4)

The Money Tree (Table of Contents: 5)

First Line of Dialogue or Text
Here comes Porky with another load of snowballs!
Genre
anthropomorphic-funny animals; humor
Characters
Porky Pig; Petunia Pig; Cicero Pig; Sam Steele (bank robber); sheriff
Synopsis
Porky, Petunia, and Cicero are having a snowball fight when a robber drops his loot from a plane and it lands in a tree. When a big snowball hits the tree, bills drop like leaves and Porky thinks he's found a money tree.
Reprints

First Line of Dialogue or Text
Oh-oh! Looks like Sylvester’s in a jam again!
Genre
anthropomorphic-funny animals
Characters
Porky Pig; Sylvester; Al (fish merchant); various ice fishermen; iceboat rental agent; Frosty (crook); Duke (crook)
Synopsis
Porky and Sylvester rent an iceboat to go to the middle of the lake to ice-fish. They happen to pick the spot where two crooks were planning on finding a suitcase of money they had dumped overboard before the freeze.
Reprints
Keywords
ice-fishing; iceboats; reward; robbers

Sylvester is in his “eloquent vagabond” characterization that persisted in the late 1940s, well into the 1950s. The bank loot comes from the “Tanktown Bank”. “Tanktown” being a location name Carl Fallberg has used in other stories, in particular those starring Mickey Mouse.

[Boasting on His Coasting] (Table of Contents: 7)

First Line of Dialogue or Text
Oh, oh! I think we're out of gas!
Feature Logo

Back cover in color. Pantomime story. Last panel is Dell's "A Pledge to Parents."