[Violin and Doughnuts] (Table of Contents) 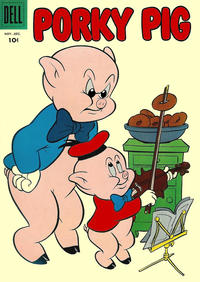 First Line of Dialogue or Text
How do you like my new hat, Porky?
Genre
anthropomorphic-funny animals
Characters
Porky Pig; Petunia Pig
Synopsis
Petunia is proud of a new hat she is wearing and wants Porky to figure out what is so different about it. He figures out she used real fruit and flowers when a horse they pass by eats part of it.

Job Number
P.P. #49-5611
Genre
anthropomorphic-funny animals
Characters
Porky Pig; Petunia Pig; Cicero Pig; Monsieur Allie; Sneaky; Sniffy
Synopsis
Petunia finds out that when she plays the piccolo the sound scares away all of the rats. She only wants to be known for how good she sounds, but instead she gets a job helping the town of Hamlitz get rid of their rats. They sell rat traps so when a few rats are spotted there they have to get rid of them or their traps will quit selling. It turns out that a rat is teaching other rats how to avoid their traps, but Petunia's playing saves the day.
Reprints

"The Scholarly Scalawag" (Table of Contents: 3)

Genre
anthropomorphic-funny animals
Characters
Henery Hawk; Orville; "Leaping" Lena
Synopsis
Henery Hawk decides he wants to catch more than one chicken at a time so he tries something different. He tries being helpful and reading poetry out loud. The chickens like to hear him read so they go to his home to listen. He starts whispering as he reads so that they will have to come inside but Lena goes in first and sees that he is reading a book about how to prepare chicken. They overpower him with their numbers and force him to read real poems to them.

Porky Pig and the Mysterious Mummies (Table of Contents: 4)

Genre
anthropomorphic-funny animals
Characters
Porky Pig; Sylvester; Little Louie; Tall Paul
Synopsis
Porky Pig has a new job as guard for a museum. He decides to show Sylvester around while he closes up. What he doesn't know is that two thiefs are hiding inside of new mummy cases so that they can steal the world's largest pearl. Porky and Sylvester manage to thwart the robbery. Sylvester is offered a job as an assistant guard but turns it down because "my mummy said there would be days like this - but I'm not about let it become a habit!"
Reprints

The Wandering Warbler (Table of Contents: 5)

Genre
anthropomorphic-funny animals
Characters
Mary Jane; Sniffles; Mary Jane's mother; Cheeper
Synopsis
When Cheeper escapes Mary Jane makes herself little and goes out into the night with Sniffles to find him. Once they find him they are not sure how to get home but lightning bugs help show them the way.
Reprints

Porky Pig is running for Junior Mayor and Cicero is convinced that two photographers trying to get a candid photo are really bad guys tryng to kill him. He gets Porky so spooked that he runs to the police with the photographers right behind. Porky jumps in a jail cell asking for protection and the photographers take a picture of him in jail. Porky is mad at him and Cicero asks the police to keep him in jail for at least 10 seconds so that he can get a head start running away.

Genre
anthropomorphic-funny animals
Characters
Porky Pig; Cicero Pig; Bugs Bunny; Elmer Fudd
Synopsis
Porky and Cicero clean out their garage and take everything to the dump, however, Cicero mistakenly took Porky's tennis racket also. When they go back to look for it Bugs and Elmer see them and think that they are so poor that they have to get their furniture from the dump. When they get home their garage is full of furniture donated to them by their friends.
Reprints

First Line of Dialogue or Text
Fontleroy needs some exercise, Cicero!
Genre
anthropomorphic-funny animals
Characters
Cicero Pig; Fontleroy
Synopsis
Cicero Pig is paid 25 cents to walk Fontleroy for an hour, but he gets tired. He solves the problem by taking Fontleroy to the store and letting him walk up the down escalator.

Inside back cover, black & white.

Have Mom and Dad take you down to see the new toys in Toyland! (Table of Contents: 11) (Expand) /