[This Lion Could Be Tamer] (Table of Contents) 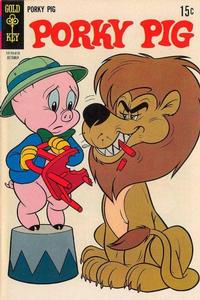 [All That Glitters is Not Carrots] (Table of Contents: 3)

First Line of Dialogue or Text
Why is a pianist like sixteen ounces of lead?
Characters
Gold Key Kid
Keywords
jokes; riddles

Jokes and riddles submitted by readers.

A highly unusual entry as Western Publishing text stories go, in that Daffy Duck is very much in his “fast-talking huckster” mode, as is often seen in the theatrical animated shorts directed by Robert McKimson, as opposed to the shiftless-yet-clever moocher persona typically offered by Western’s comics. The Duck is given much double-talking nonsensical dialogue that one could easily hear being swiftly spoken by voice actor Mel Blanc. As a topper, the single illustration of Daffy and Beaky Buzzard that accompanies this text story is drawn by Tony Strobl, who very rarely draws Daffy Duck – but, when he does, draws him in the "Big-Beaked Robert McKimson style”.

Genre
humor
Characters
chicken; workman
Synopsis
A hungry chicken mistakes a sack of cement for a sack of corn, washes it down with some fountain water, and stiffens into a quick-drying statue.
Keywords
cement; chicken

Pantomime. Lower half of page.

First Line of Dialogue or Text
At the beginning of the Mesozoic Age about 190 million years ago, a huge flesh-eating sea dinosaur appeared in the prehistoric waters – the plesiosaur.
Genre
non-fiction
Keywords
dinosaurs; educational feature