Cover code: 10140-104. First issue of this series where the configuration of advertisement pages and “Gold Key Comics Club” pages (that is “non-story pages”) is redistributed from that which had been in effect since the Gold Key Comics titles issued in (or after) January, 1967. (In the case of the “Porky Pig” title, that would be issue #10.) Previously, such non-story pages were limited to the four pages of the centerfold, and the final two interior pages (interior pages 31-32) for a total of SIX pages carved-out of each issue. Beginning with this issue, the number of non-story interior pages would be increased to SEVEN scattered throughout the issue, and would begin on interior page four. It would continue to increase throughout the 1970s.
Keywords
change in advertising configuration 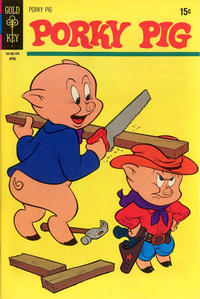 Josie and the Pussy Cats Cut 4 Records for Kellogg's (Table of Contents: 1) (Expand) /

Austrian Stamp Recalls the Age of Operetta (Table of Contents: 4)

First Line of Dialogue or Text
The splendor of the operetta is inseparably associated with the splendor of the social structure of a monarchy.
Genre
non-fiction
Synopsis
Discusses Austrian Postal Authorities issuance of commemorative postage stamps devoted to famous operettas. Also the 1970-71 edition of the “U.S. Specialized Catalog of First Day Covers” (providing up-to-date market values) for 1.00, Norway’s issuance of postage stamps honoring great Norwegian scientists, a list of “the ten most wanted coins on the list of every serious collector”, and medals honoring Air Force General Curtis E. LeMay and commemorating the 25th anniversary of Hiroshima.
Keywords
25th anniversary of Hiroshima; General Curtis E. LeMay; Norwegian scientists; operettas

First Line of Dialogue or Text
There must be a way to catch that dratted Tweety! There’s got to be!
Feature Logo

The first line quote above is a standard of the Mary Jane and Sniffles comic stories, as the “magic words” by which Mary Jane shrinks to the size of Sniffles the Mouse, to have adventures in various fantasy realms.

The Helping Handers (Table of Contents: 9)

First Line of Dialogue or Text
What’s this… Have Porky and Bugs joined the paratroopers?
Feature Logo

Your Future in the Graphic Arts/As a Printing Craftsman (Table of Contents: 10)

Two half page articles on possible careers accompanied by illustrations. Between pages 3 and 4 of previous story.