Worlds Without End! (Table of Contents) 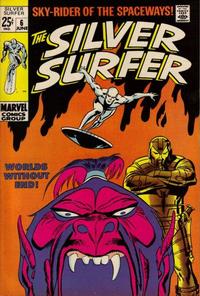 Worlds Without End! (Table of Contents: 2)

First Line of Dialogue or Text
How much longer must I be an alien prisoner upon the savage planet Earth?
Genre
science fiction; superhero
Characters
Silver Surfer; Shalla Bal; The Overlord (villain, first appearance, origin, death)
Synopsis
The Silver Surfer exceeds the speed of light, in an effort to escape the barrier placed by Galactus, only to find that he has travelled into the future.
Reprints
Keywords
Atomic Experimental Center; cardiascope; time travel; Zenn-La

In the letters page of Sub-Mariner #19 Roy Thomas notes that Bill Everett was colorist for "recent issues" of the Silver Surfer.

Awe-Inspiring Announcements to Yawn With! (Table of Contents: 3) (Expand) /

The Unsuspecting! (Table of Contents: 4)

First Line of Dialogue or Text
Can an unearthly race invade Earth without anyone suspecting it?
Genre
science fiction; superhero
Synopsis
Shape-changing aliens assume the form of an innocuous object in order to conquer Earth.
Reprints

Kuramoto credit per Nick Caputo, April 2013. Previous indexer credited Ray Holloway but based upon an examination of the lettering styles that was an error and the pseudonym "Sherigail" was derived from Morrie Kuramoto's wife and daughter, Gail and Sherry, as noted here:

A magazine titled the "Silver Surfer" is mentioned and appears in the story. The Marvel bullpen is also referred to within the story.

Who Speaks for the Surfer? / letters page / 2 pages (report information)