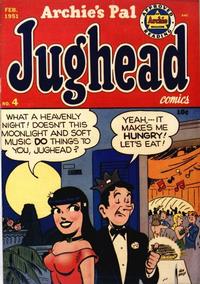 Uncle Sam Has A Green Thumb (Table of Contents: 1) (Expand) /

Inventin' We Will Go (Table of Contents: 3)

Characters
Jughead Jones; Herman Jones
Synopsis
Uncle Herman tries to turn the new television into a 3-D television and it seems he succeeded.

An Ounce of Prevention (Table of Contents: 5)

The Sad Sock (Table of Contents: 6)

Genre
teen; humor
Characters
Jughead Jones; Archie Andrews; Mr. Lodge
Synopsis
Jughead gets a job as Mr. Lodge's house boy. When Mr. Lodge calls home to get his stocks, Jughead brings him his socks. It turns out well for Jughead when the stock goes back up and Mr. Lodge makes more money.

The Test Pest (Table of Contents: 10)

Genre
teen; humor
Characters
Reggie Mantle; Archie Andrews; Miss Grundy
Synopsis
Archie gets his shirt caught in the mimeograph while helping Miss Grundy print tests. Reggie gets the test answers off of Archie's shirt. Unfortunately, Reggie had spilled ink on the test without realizing it, so Miss Grundy made up a whole new test.

Three activities: a maze, a drawing exercise, and a riddle

The Run-Around (Table of Contents: 13)

Genre
humor; teen
Characters
Jughead Jones; Archie Andrews
Synopsis
While Jughead is getting a new pair of pants altered, someone steals his old pants. To escape embarassment, he decides to join the race running past the store to blend in wearing his boxer shorts.
Reprints