The on-sale date is from the publication date recorded in the Catalog of Copyright Entries, Third Series, Vol. 8, Part 2, No. 1, Periodicals, January-June, 1954.

Later redrawn for the cover of Archie's Pal Jughead #72 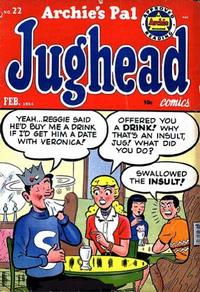 Genre
teen; humor
Characters
Jughead Jones; Archie Andrews; Reggie Mantle
Synopsis
After Jughead explains all the beneficial uses of his beanie, Archie and Reggie both decide to get matching beanies too.

Genre
teen; humor
Characters
Jughead Jones; Archie Andrews; Reggie Mantle; Moose Mason; Midge Klump
Synopsis
Jughead dresses up as a woman, the fictional Agatha Culpepper with a Southern accent. After buttering up Moose, he exclaims his joy in meeting Midge and kisses her. Later, looking completely beat up, he explains to Archie and Reggie that Midge beat him up thinking he (as she) was trying to steal Moose away from her.

Peanuts To You! (Table of Contents: 5)

Genre
teen; humor
Characters
Suzie
Synopsis
Suzie complains about having peanut butter and jelly sandwiches every day, but she admits she makes them herself.

Genre
teen; humor
Characters
Jughead Jones; Reggie Mantle; Archie Andrews; Betty Cooper; Veronica Lodge
Synopsis
Jughead bets Reggie that he has seen every word of Reggie's speech in a book. Reggie bets him a dozen sodas he hasn't. Jughead proves it by bringing in the book, the dictionary.

Genre
teen; humor
Characters
Jughead Jones; Miss Grundy
Synopsis
Jughead says the incorrect "they have went home," so Miss Grundy makes him write "gone home" on the board 100 times. When he finishes, she isn't there, so he leaves a note to her, saying, "I have went home."

It's All Mental (Table of Contents: 9)

Genre
teen; humor
Characters
Wilbur Wilkin
Synopsis
Wilbur is so distracted while mowing the lawn, that he doesn't get any of the grass cut, so his father fixes the problem by putting blinders on his head.

What the Doctor Ordered (Table of Contents: 11)

Genre
teen; humor
Characters
Jughead Jones; Pop Tate
Synopsis
Pop Tate offers to sell a sundae of the customer's design for only one dollar. Jughead designs an enormous sundae which Pop Tate builds, finishing it off with a key on top so that Jughead can close the shop when he's done eating it.

Genre
humor; teen
Characters
Jughead Jones; Reggie Mantle; Archie Andrews; Miss Grundy
Synopsis
Jughead records his lessons on tape and learns them by playing them while he sleeps. Reggie tries this trick by switching Jughead's tape with an old tape of lullabies. However, Jughead recorded Musical History but Reggie was taking a Chemistry test. When he looks in on Jughead's Musical History class, he sees that Jughead has the room of girls in a swoon by singing.
Reprints

Credits from the reprinting in Jughead's Double Digest (Archie, 1989 series) #200.

Cat and Mouse (Table of Contents: 14)

Genre
humor; teen
Characters
Jughead Jones; Archie Andrews; Veronica Lodge; Reggie Mantle
Synopsis
Archie wants out of a date with Veronica to the Cat Show, so he takes advice from Jughead and makes her ashamed to be seen with him by making up his eye to look as if he's been in a fight. Reggie has overheard this trick and makes his eye up too, to avoid the Cat Show. In the end, Jughead is stuck going to the Cat Show with Veronica.
Reprints

This is a rare instance of Jughead's clever ideas not turning out in his favor.