The on-sale date is from the publication date recorded in the Catalog of Copyright Entries, Third Series, Vol. 8, Part 2, No. 1, Periodicals, January-June, 1954.

Later redrawn for the cover of Archie's Pal Jughead #71 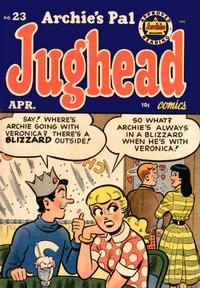 Dots the Trouble (Table of Contents: 1)

Some Class (Table of Contents: 2)

Genre
humor; teen
Characters
Jughead Jones; Betty Cooper; Veronica Lodge
Synopsis
Betty is jealous because Archie gave Veronica one of his class pins. Jughead claims he can get Betty another of Archie's class pins, but when he does, it wasn't what Betty was expecting.
Keywords
class pins; safety pins

First Line of Dialogue or Text
It's the sweetest 5-letter word I know!
Synopsis
A rebus, cross out the even numbers, word ladder (roam to fear), and Corn Off the Cob jokes.

Paint It the Truth (Table of Contents: 5)

Genre
humor; teen
Characters
Jughead Jones; Betty Cooper; Reggie Mantle; Mr. Weatherbee
Synopsis
Reggie makes fun of Jughead's painting. When Mr. Weatherbee is going to have a door added to his office, Jughead paints a realistic door and Reggie bangs into the wall. The next day, after the door has been installed, Reggie still thinks it's a painting and gets in trouble with Mr. Weatherbee.
Keywords
painting; practical joke

The Awful Tooth (Table of Contents: 6)

Down the Hatch (Table of Contents: 7)

Genre
humor; teen
Characters
Jughead Jones; Reggie Mantle
Synopsis
Jughead thinks Reggie has drunk a glass of turpentine, thinking it was soda pop, and rushes him to the school dispensary. After treatments to clear Reggie's stomach, including use of a stomach pump; Jughead returns to tell Reggie it was all a mistake and the liquid was soda after all.
Keywords
emetic; soda pop; stomach pump; turpentine; vomiting

Rather graphic panel on page two of Reggie running for the bathroom with his hand over his mouth after drinking an emetic solution.

The Molar the Merrier (Table of Contents: 9)

Genre
humor; teen
Characters
Jughead Jones; Archie Andrews
Synopsis
Jughead goes to the dentist and is in a hurry to have a tooth pulled.
Keywords
dentist

Genre
humor; teen
Characters
Archie Andrews; Jughead Jones; H. Peever
Synopsis
Jughead helps Archie overhaul his car. However, when Archie takes it out for a drive, the steering doesn't work and he ends up driving through the Justice of the Peace's yard and flowers.
Keywords
auto repairs; traffic tickets

Genre
humor
Characters
Suzie; Ferdie
Synopsis
Ferdie's stomach is upset because his mother's been away for two week and restaurant food isn't agreeing with him.
Keywords
diner; restaurant

Statement of Ownership for October 1, 1953. No circulation figures listed.

Genre
humor; teen
Characters
Archie Andrews; Jughead Jones; Veronica Lodge; Betty Cooper; Dilbert [Dilton Doiley ?]; Reggie Mantle; Mr. Weatherbee (cameo)
Synopsis
When Dilbert only gets a 99 on a test instead of 100, he is depressed and goes to the chemistry lab. Reggie tells Archie and Jughead that Dilly drank some monacetic-acidester of salicylic acid. Finding Dilly lying down in the locker room, Archie and Jughead both assume the worst and call a doctor and Mr. Weatherbee, not realizing that Dilly had just taken some aspirin for a headache.
Keywords
aspirin; chemistry; telephone

Dilbert appears to be the character later called Dilton Doiley.

The Star Gazer (Table of Contents: 18)

Genre
humor; teen
Characters
Archie Andrews; Reggie Mantle; Jughead Jones; Betty Cooper; Veronica Lodge
Synopsis
Reggie and Archie decide to have a duel over who gets to take Veronica to the dance. Archie chooses a custard pie duel in their evening clothes. Veronica only hears "duel" and rushes a doctor to the site. She arrives in time to get hit by a errant pie.
Keywords
custard pie; duel; pie fight

First Line of Dialogue or Text
Hmmm-as much as I'd like to eat those cookies...
Genre
humor
Characters
Katy Keene; Sis; Bertha
Synopsis
Sis tries to help Katy by putting away the dishes, but falls and knocks over the cookie jar, causing Katy to think she was taking cookies.
Keywords
cookies; dishes