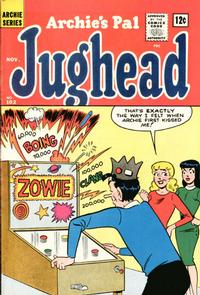 Genre
humor; teen
Characters
Archie Andrews; Jughead Jones; Reggie Mantle
Synopsis
Archie and Reggie complain that Jughead's presence keep the girls away on the beach. However, once Archie and Reggie leave, Jughead starts becoming an attraction for all the girls because of his hard-to-get attitude.
Reprints
Keywords
beach; lifeguard

Synopsis
Billy wins all the races since he got a new bike with a Bendix transmission and brakes.

Ad in comic format for Bendix bicycle transmission and power brakes, with mail-in coupon for a free folder. The Bendix Corporation, Eclipse Machine Division, Elmira, N.Y. This ad is printed sideways to fill the whole page. In most other comics it is printed in regular format to fill a half-page.

Genre
humor; children
Characters
Li'l Jinx; Greg
Synopsis
Jinx hits a baseball into the yard of a cranky neighbor who won't let her have it back.
Keywords
baseball; dog; neighbor

Genre
humor; teen
Characters
Jughead Jones; Mrs. Jones
Synopsis
Jughead can't sleep, so he gets up for a late night snack of a leg of lamb.
Keywords
insomnia; lamb; snack

Genre
humor; teen
Characters
Archie Andrews; Jughead Jones; Mr. Lodge
Synopsis
Jughead plays a practical joke on Mr. Lodge by replacing a fish in his aquarium with a larger one several times making it seem like it is growing. However, Mr. Lodge finds out and gets the last laugh.
Reprints
Keywords
pet shop; practical joke; shark; swimming pool; tropical fish

Promo for The World of Jughead #24 with mail-in coupon. Cover is depicted, along with original art of Jughead having "the world on a string."

First prize of $5.00 to David Robinson (West Warwick, R.I.) for an article on his trip to Minnesota. Second prize of $3.00 to Gail Storrs (Vancouver, Wash.) for her account of a Columbus Day storm. Third prize of $2.00 to Barbara Palese (Floral Park, N.Y.) for a story about her sister. Fourth prize of $1.00 to Kathleen Corbi (Philadelphia, Pa.) for three jokes.

Promo for memberships in the Archie Club with mail-in coupon. Cost is 15 cents.

The "Popsicle Kids" Play It Safe! (Table of Contents: 12)

Ad in comic format for the "Popsicle" Safety Club. Coupon to become a member of the club requires three red "sicle" balls from wrappers plus 10 cents for handling.

Genre
humor; teen
Characters
Archie Andrews; Betty Cooper; Reggie Mantle; Jughead Jones; Miss Grundy; Mr. Weatherbee; Veronica Lodge
Synopsis
Archie and Betty drop by Reggie's house to get him to take them out for a hamburger. The trio pass Jughead and invite him along, but he declines, saying he's going on a diet. Jughead keeps up his diet long enough that Mr. Weatherbee decides to put him in charge of the refreshment stand at the school carnival. The diet doesn't last long after that.
Reprints
Keywords
carnival; diet; hamburger

First Line of Dialogue or Text
Get a lucky piece..free when you join the Archie Comic Book Club!
Characters
Archie Andrews

Inside back cover. Promo for the Archie Comic Book Club with mail-in coupon. Membership consists of subscribing to an Archie title at the rate of ten issues for $1.00. With every subscription there is a premium of a Keewanee Lucky Penny Piece.