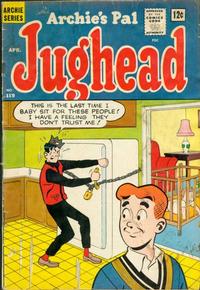 The Statue (Table of Contents: 1)

Genre
humor; teen
Characters
Jughead Jones; Archie Andrews; Betty Cooper; Veronica Lodge; Midge Klump; Moose Mason; King Avon Kaling
Synopsis
Jughead brings to life an ancient Egyptian statue in a museum, so he decides to feed him hamburgers. The living statue tries to attack Betty and Veronica, but they only laugh at his clothing. He finally manages to scare Midge, but Moose takes care of him in one punch.
Reprints

The name "Avon Kaling" is a pun on the cosmetic company tagline "Avon Calling."

Genre
humor; teen
Characters
Jughead Jones; Mrs. Jones
Synopsis
Jughead says he'll use his old sweater when he paints. When his mother says she has bought the paint, Jughead offers to help her get rid of the old sweater.
Reprints

Jughead's old sweater is a classic one with the "S" on the front.

Genre
humor; teen
Characters
Jughead Jones; Reggie Mantle; Mr. Weatherbee; Betty Cooper; Veronica Lodge
Synopsis
Jughead accidentally trips and the pie he was holding flies into Reggie's face. This becomes an excuse for an all-out pie fight. Everyone gets to taste the pie and it works up an appetite, so they sit down and eat the pies.
Reprints

Script credit from the reprint in Archie's Funhouse (Archie, 2014 series) #3.

Swing into Spring with Betty and Veronica (Table of Contents: 6) (Expand) /

Genre
teen; humor
Characters
Jughead Jones; Mr. Weatherbee; Archie Andrews; Miss Grundy
Synopsis
Mr. Weatherbee dumps Miss Grundy's fresh soil out his window, so Archie and Jughead drop her potted plants one by one to replant them in the pile of soil. The last one was her prize geranium, which lands on Mr. Weatherbee's head as he looks out to see what's going on.
Reprints

Archie Gets All the Brakes (Table of Contents: 8) (Expand) /

Pardon My Computer (Table of Contents: 11)