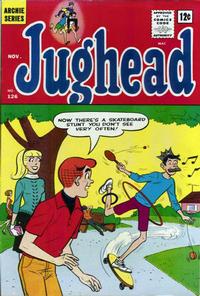 Genre
humor; teen
Characters
Captain Hero [Jughead Jones]; The Fink (a super-villain); Hot Foot (super-villain); Ethel Muggs; Pop Tate
Synopsis
Jughead has a dream of being Captain Hero and being thanked by Big Ethel. He orders a lot of spicy food from Pop and says it won't give him nightmares because he's given up sleeping.
Reprints

Genre
humor; teen
Characters
Archie Andrews; Jughead Jones
Synopsis
Archie says he's not worried about bullies kicking sand in his face. He's trained himself to stay in the water all the time.

Genre
humor; teen
Characters
Jughead Jones; Betty Cooper; Veronica Lodge; Moose Mason
Synopsis
Betty and Veronica try to help Jughead escape from Big Ethel but they run him into a tree and into a tree limb. Moose takes up the task, carrying Jughead, but he slips and sends Jughead flying into garbage cans. Jughead ends up running toward Big Ethel to save him from his friends' attempts.
Reprints

Time Out (Table of Contents: 6)

Genre
humor; teen
Characters
Jughead Jones; Archie Andrews; Reggie Mantle
Synopsis
Jughead is chased by girls because he is unavailable to them. Reggie tries to get their attention but they want nothing to do with him. When Jughead brags about it, he ends up being chased by Reggie.
Reprints

When reprinted in Jughead's Double Digest (Archie, 1989 series) #195, writing is credited to Frank Doyle and Inks & Lettering are credited to Marty Epp.