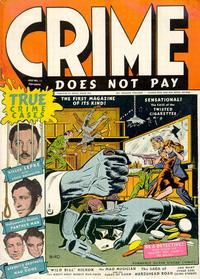 Crime Does Not Pay a Completely New Kind of Magazine (Table of Contents: 1)

The Real Story Behind Lepke, Mad Dog of the Underworld (Table of Contents: 2)

Next issue blurb promises the story of Pancho Villa.

The final panel reads "Next month CRIME COMICS brings you..." (not Crime Does Not Pay).

Volp is credited on this series by Jerry Bails' Who's Who, and the artwork here, with marked, bony cheeks and mouth often rendered in two short lines, can be found in his signed London stories in Daredevil Comics #9 and 10 (Lev Gleason).

Last panel reads "Next month and every month CRIME COMICS will give you the real truth behind the unsung police heroes of our day." Like the last panel of the previous story, this suggests the original planned title of the comic was CRIME COMICS but was changed to CRIME DOES NOT PAY.

The Saga of Harpshead Road (Table of Contents: 5)

The Mad Musician and His Tunes of Doom (Table of Contents: 7)

The Case of the Twisted Cigarettes (Table of Contents: 9)

The solution appears on the last page of the War Eagle story.

First Line of Dialogue or Text
Steel grey wings over America...
Genre
superhero
Characters
The War Eagle [Bill Reed] (introduction); Mrs. Reed (Bill's mother); Bonnie (Bill's sweetheart); Roger Currians; Klein (crew member on S.S. Atlantic, death); Kelly (watchman); Mike (Policeman); The Wrench (villain, introduction, death); the Nazis (villains)
Synopsis
Although struck down with infantile paraylsis, wealthy Bill Reed, after being put down by a college rival for his sweetheart's hand, develops a set of wings, and, over a period of two years, perfects them and is able to walk again. He dedicates his life to serving mankind: foiling hijackers, rounding up public enemies, and so on until a foe emerges called the Wrench, who had suffered injuries from grabbing an incendiary bomb in the 1st World War, and who threatens the S.S. Atlantic.
Reprints
Keywords
Daily Express; S.S. Atlantic; The Tabloid

Only appearance of the War Eagle.

The solution to the "Blackout Murder Mystery", found elsewhere in the issue, is found at the bottom of page 10.