All-Winners Comics is published quarterly by U.S.A. Comic Corp. at Meriden, Conn. Entered as second class matter, April 24, 1941, at the post office at Meriden, Conn. under Act of March 3, 1879. Single copies 10c; yearly subscription $.40. Entire contents copyrighted 1942 by U.S. A. Comic Magazine Corp., 330 W. 42nd St., New York, N. Y. No similarity between any of the names, characters, persons and/or institutions appearing in this magazine with those of any living or dead person or institution is intended, and that any such similarity which may exist is purely coincidental. 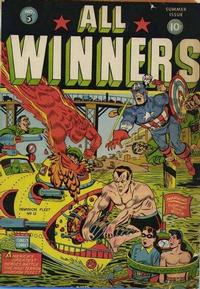 Found on the inside front cover. Oddity: on this page, the Destroyer is shown but the TOC doesn't list his story, and instead asks "Have you read 'Krazy Komics'"? Sequence and all info added by Craig Delich 7-3-08.
The Destroyer story is listed in the TOC, but not in the order in which it appears in the comic. It is listed in TOC before Sub-Mariner but appears after.

First Line of Dialogue or Text
The murdering Nazi gangsters hid a secret headquarters from everyone!
Genre
superhero
Characters
Human Torch [Jim Hammond]; Toro [Thomas Raymond]; Captain Von Spitz (villain; introduction)
Synopsis
Torch and Toro discover that the Nazis are operating out of a steamship anchored at a Coney Island pier. The Nazis intend to deliver a bomb (along with needed tanks of oxygen) to a hospital in order to kill thousands.
Reprints

Synopsis and some info added by Craig Delich 7-3-08.

Characters
Keith Clark
Synopsis
Famous international magician, Keith Clark, explains (in text and illos) how to do tricks used by magicians, such as the vanishing coin box, Indian basket mystery, the magnetic coin and others.
Reprints

Sequence and all info added by Craig Delich 7-3-08.

The Vampire Strikes! (Table of Contents: 5)

Synopsis and some info added by Craig Delich 7-3-08. Information for Comix: A History of Comic Books in America reprints submitted by Cesar Esteban Diaz via the GCD Error Tracker.

[Speed on the Rampage] (Table of Contents: 7)

Genre
superhero
Characters
The Whizzer; Warden Balew (villain)
Synopsis
Whizzer must tackle a crooked prison warden who has formed "A League of Petty Crimes" which allows prisoners to "escape" from prison, commit crimes, then return with the loot, having an alibi no one can prove untrue.
Reprints

Synopsis and some info added by Craig Delich 7-3-08. Ernie Hart as Howard James supported by Who's Who entry.

The Man in the Moon (Table of Contents: 9)

Genre
adventure
Characters
Bruce Henderson
Synopsis
On December 31, 1941.....New Year's Eve, Bruce Henderson was in the jungles of Brazil and comes upon a rocket ship, and decides to use it to fly to the Moon. When he returns, no one believes him, until........they discovered, as Henderson told them they would, the large, mile-long letters "U S A" on the Moon's surface that he had made while he was there, and which they could now see using a new improved telescope!
Reprints

First Line of Dialogue or Text
A special message to the boys and girls of America from Henry Morgenthau, Jr., Secretary of the Treasury
Genre
advocacy
Synopsis
The editors of this magazine print a letter from the U.S. Secretary of the Treasury, encouraging the boys and girls of America to buy their Savings Stamps to help the U.S. win the war effort.
Reprints

The Hermit's Island of Glittering Gold! (Table of Contents: 11)

Genre
superhero
Characters
The Sub-Mariner [Prince Namor]; un-named hermit; Marshal Doering (villain; introduction); the Nazis (villain)
Synopsis
After up-ending a boatload of Nazis into the drink, Namor lands on an isle, only to discover it is covered with gold. However, he must not only battle the Nazis, who become shipwrecked there, but the strange hermit who resides there, believing all these visitors are there to steal the gold.
Reprints

Synopsis added by Craig Delich 7-3-08. Bill Everett joined the army in February 1942 so this may have been one of his last stories prior to joining, however he usually signed his stories so accreditation is uncertain.

First Line of Dialogue or Text
We get 50 miles on a pair of rubber heels
Genre
humor
Synopsis
In a series of single panel cartoons, the writer/artist illustrates humourous inventions that should be patented to make people's life a bit easier.
Reprints

Sequence and all info added by Craig Delich 7-3-08.

Synopsis and some info added by Craig Delich 7-3-08.

First Line of Dialogue or Text
Dead or alive???
Synopsis
The famous international magician, Keith Clark, through text and illustration, explains how magic tricks, such as the spook rapping trick, the reading of burnt messages and others are actually done.
Reprints

Synopsis and other info added by Craig Delich 7-3-08. Keith Clark (Pierre Cartier), a magician, is credited as writing these.