The Rain of Terror! (Table of Contents) 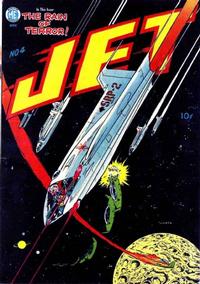 The Rain of Terror! (Table of Contents: 1)

The First Man in History Who Could Not Die! (Table of Contents: 2)

Jet Powers appears in this story only in the splash panel, where he introduces it as 'a spaceways saga' 'from my secret files'.

Genre
science fiction
Characters
Space Ace; Dalla; Flor; Benton Thorpe Ace
Synopsis
Space Ace sets out to collect the reward for finding missing scientist Benton Thorpe, but instead finds a woman drifting in space. He rescues Dalla and hears her tell how her ship was invaded by aliens and Thorpe was captured. He follows her ship to Titan, but Dalla's story was all just part of a trap planned by Flor to capture him. Flor, the leader of the space pirates, intends to get revenge on Space Ace for tricking her in a previous scheme.
Reprints

Credits from The Al Williamson Reader (Pure Imagination, 2008 series) #[nn] indicate that this story was inked by Wally Wood.

Most of the inking is by Williamson, with Wood inking the female faces (and perhaps bodies). So, for example, on page 5, where there are no females, there is no sign of Wood.

A good deal of the inks on the male bodies and faces are clearly by Frank Frazetta, with very little evidence of Williamson inks.

The Fleets of Fear! (Table of Contents: 4)