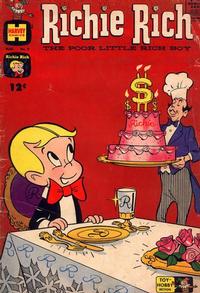 Creator credits on the back of the original art page. A rarity for Harvey Comics!

Something Simple (Table of Contents: 2)

Genre
humor; children
Characters
Richie Rich; Gloria Glad; florist; doll shop salespeople; candy stand clerk
Synopsis
Richie wants to bring Gloria a gift. She tells him to bring something simple, and he knows that she will be upset if he spends much money. Through a series of coincidences, he ends up with several large gifts without spending any money, arriving on her doorstep with an assortment of items that is anything but simple.
Reprints

The Boy and The Butler (Table of Contents: 5)

Genre
humor; children
Characters
Richie Rich; Richard Rich; Cadbury; Mr. Fiscal
Synopsis
When Mr. Rich can't join Richie for a planned hiking trip, he asks their butler Cadbury to go in his place. Richie doesn't have high hopes for the expedition, wondering to himself what a "stiff-necked" butler knows about hiking. However, Cadbury soon leads them off the regular path, opening Richie's eyes to parts of the estate that he has never seen. Cadbury repeatedly demonstrates his expertise and resourcefulness as an outdoorsman, teaching Richie a thing or two in the process. When asked later what Richie wants to be when he grows up, he says he wants to become a butler just like Cadbury.
Reprints

Although this is not Cadbury's first appearance, it is the first time that both the reader and Richie see that he is a man of action. This story begins the close association Richie will have with Cadbury going forward and opens the door for the role Cadbury will play in future action-oriented adventures.

Genre
humor; children
Characters
Dot Polka [Little Dot]; Mrs. Polka; Uncle Sneezer; children; woman pedestrian
Synopsis
Dot is dismayed when her uncle's sneezing scares off animals during their walk, but then she learns that his sneezes can be useful too.
Reprints

The Friend (Table of Contents: 7)

Genre
anthropomorphic-funny animals
Characters
Abner Ant; ant leader
Synopsis
While trying to establish a new colony, a group of ants has all but determined that the new location is not a good one. But Abner returns from a scouting mission boasting of plentiful supplies and a helpful friend.
Reprints

Genre
anthropomorphic-funny animals
Characters
Gus Gopher; Geraldine; Garry
Synopsis
Gus narrowly avoids a rattlesnake, a coyote and an owl on his way to visit Geraldine, but is modest about his exploits when he arrives.
Reprints