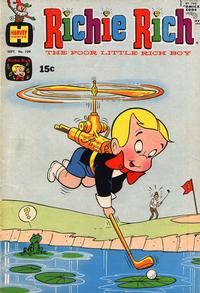 The Movie Mogul (Table of Contents: 5)

Part One of Two. Continued in this issue as "Danger at Every Turn!".

First Line of Dialogue or Text
I sure hope Lotta will like this doll...
Genre
children; humor
Characters
Little Dot; Little Lotta
Synopsis
Lotta likes the doll Dot gives her until she finds out it can eat.

Danger at Every Turn (Table of Contents: 8)

Part Two of Two. Continued from "The Movie Mogul" in this issue.

This story should not be confused with "The Performing Butler", also featuring Cadbury and appearing in Richie Rich Success Stories (Harvey, 1964 series) #25 and Richie Rich (Harvey, 1960 series) #127. Despite the similarity in titles, this story and those depict different events.