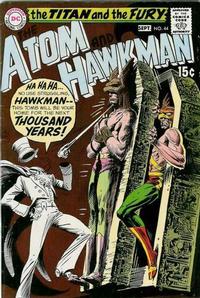 Job Number
S-147
Genre
superhero
Characters
Hawkman [Katar Hol]; Hawkgirl [Shayera Hol]; The Gentleman Ghost [Jim Craddock] (origin); Zita
Synopsis
The Gentleman Ghost meets a blind psychic who falls in love with him. She believes that there is a jewel that will restore her sight, so he embarks on a string of jewel robberies to find the right one. The Hawks don't capture him, but Hawkman finally admits to his wife that the Ghost is truly a phantom and not just pretending to be one.
Reprints

Credits for script, pencils and inks confirmed from Julius Schwartz's editorial records, provided by DC Comics.
Page 6 is a 2/3-page and page 13 is a 1/2-page.

Hate Is Where You Find It! (Table of Contents: 3)

Job Number
S-130
Genre
superhero
Characters
Atom [Ray Palmer]; Jean Loring; Ag (villain); Heinrich von Rilk
Synopsis
When the electron microscope lab is blown up at Ivy University, Professor von Rilk is accused to being a Nazi saboteur. Ray Palmer gets his fiancée Jean to defend the professor, then shrinks down as the Atom to find the origin of the explosion.