U. S. A. COMICS is published quarterly at Meriden, Conn., by U.S.A. Comic Magazine Corp. Entered as second class matter May 2, 1941 at the post office at Meriden, Conn., under the Act of March 3, 1879. Contents copyright 1942 by U.S.A. Comic Magazine Corp. 330 W. 42nd St., New York, N. Y., Martin Goodman, Pres. Vol. 1, No. 5, Summer, 1942 issue. Yearly subscriptions $.40 in the U.S.A. No similarity between any of the names, characters, persons and/or institutions appearing in this magazine with those of any living or dead person or institution is intended, and that any such similarity which may exist is purely coincidental. Printed in the U.S.A.

The only feature in this issue that previously or subsequently appeared in this title is Sergeant Dix (previously Corporal Dix). Victory Boys and probably the Blue Blade appeared in a slightly different forms in Comedy Comics (Marvel, 1942 series) #10. The Black Widow previously appeared three times in Mystic Comics, and subsequently in All Select Comics.

There was a prior inking credit to George Klein, but while Michael J. Vassallo notes that the Gabriele credit is "not set in stone", he and the other spotters for the Masterworks identified Klein in enough other places that it seems unlikely that they would have missed him here. 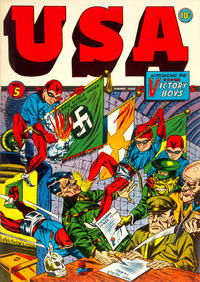 First Line of Dialogue or Text
A special message to the boys and girls of America from Henry Morgenthau, Jr., Secretary of the Treasury
Genre
advocacy
Synopsis
The publishers donated this space, on behalf of the U.S. Savings Bonds and War Stamps campaign, to published a letter from the Secretary of the Treasury, Henry Morgenthau, Jr., encouraging the boys and girls of America to buy at least one 10 cent Savings Stamp each week to help the war effort.
Reprints

Genre
superhero
Characters
Victory Boys [Victor; Maxie Stein; Kurt Erzberger; Gus Weber; Warren Zumwald] (in costume); Adolf Hitler (villain); Hirohito (villain); Benito Mussolini (villain); Hitz (villain); Fritz (villain)
Synopsis
Hitler and Mussolini need to find a way to hide Germany's difficulties from a visiting Hirohito, so they whisk him off to a castle in the Black Forest. The Victory Boys are nearby, and Maxie is chosen to go hunting for some food for them. He gets captured, and the Victory Boys must confront the three dictators to rescue him.
Reprints

The feature last appeared in Comedy Comics (Marvel, 1942 series) #10, although the characters did not wear costumes.
Next appearance of the Victory Boys in All-Winners Squad: Band of Heroes (Marvel, 2011 series) #1.

Hills of Horror (Table of Contents: 5)

Genre
adventure
Characters
Jonah Lamb (introduction); Mr. Lamb (introduction, Jonah's father, death); Budd Powers (introduction); Sen Yat (Chinese coolie); un-named Chinese bandits (villains, many die)
Synopsis
When young Jonah's father dies in an earthquake in Shanghai, Jonah leaves the city to start afresh. He runs into a drifter named Budd Powers, and the two decide to stick together. They run across a village being attacked by bandits, and jump in on the side of the villagers, eventually running the bandits off.
Reprints

Caniff-esque adventure. There is a teaser at the end for another of Jonah's adventures to be published in the next issue but it never appeared.

Doc Vassallo characterizes this as "primarily by Don Rico" but with "signs of others including Al Plastino".

First Line of Dialogue or Text
The gang laughed at Butch Brogan when he began reciting Shakespeare, but when he combined two fighting fists with Hamlet, things began to happen [...]
Genre
adventure; humor; superhero
Characters
The Fighting Hobo [Butch Brogan] (introduction); Mrs. Upsnoot (dog owner)
Synopsis
Butch Brogan, a hobo, finds a book of Shakespeare and feels inspired by it, although his fellow hobos mock him. When he sees a dog kidnapped from a woman for ransom, he volunteers to chase after the kidnappers and retrieve it.
Reprints

At the end, there is a teaser for more adventures of "Butch Brogan, the Happy Hobo" in the next issue, but they never appeared.

Vassallo notes that Klein may be a "background inker" on the story. The Masterworks edition lists Kildale & unknown on the pencils, George Klein & unknown on the inks, while Who's Who lists Fred Kida as pencils and inks.

[Sandai and the Atom Smasher] (Table of Contents: 7)

Genre
superhero
Characters
The Blue Blade; un-named scientist; Nita (scientist's daughter); Sandai (villain); un-named Japanese spy (villain)
Synopsis
The Blue Blade heads to the Pacific coast as a result of the Japanese joining the war. Once there, he saves an inventor and his daughter from Japanese spies who were trying to steal his atomic smashing machine.
Reprints

Likely a reworked version of the Fourth Musketeer from Comedy Comics (Marvel, 1942 series) #10. The different artist could explain the costume changes. As no background for the character is given at all in this story, it fits well enough (even though the Fourth Musketeer was specifically the spirit of a dead Musketeer risen to fight the Axis).

There is evidence of last-minute re-lettering of the "Blue Blade" name, and the character is referred to as "the Musketeer" twice in this story.

Next appearance in The Twelve (Marvel, 2008 series) #1, in which he was given the name "Roy Chambers", although he has no civillian name in this story.

The Masterworks edition lists the artist as unknown; in his extended online notes, Michael J. Vassallo comments that "The art is unknown but wild speculation is that this could be an early appearance of Carmine Infantino and/or even Gil Kane." Given the phrasing, this speculation is best left in the notes and not in the credits where they would appear too definitive, even with question marks.

Terror in the Sky! (Table of Contents: 9)

Genre
superhero
Characters
Roko the Amazing [Lon Crag] (introduction, origin); Joe; Menalaos (introduction); Mike; Pete; Mr. McClure (villain)
Synopsis
Lon Crag sees some other kids reading Captain America Comics at school and wishes he could be that kind of hero. In art class, his teacher compliments him on his painting of Menalaos, and Lon stays after school to complete it. When he is done, the painting comes to life and offers to grant him a wish. When he says the word "Illium," 16-year-old Lon becomes an adult superhero named Roko with "the wisdom of Ulysses, the battle-prowess of Aggamenon [sic] and the invulnerability of Achilles," and with Achilles's weakness as well.
Reprints

Only appearance. At the end, Roko addresses the readers and asks them to write to him.

At the end there is a blurb asking readers to write in if they would like to see more of Gypo and Bobby.

While the Masterworks contents only credits Winiarski with pencils, Vassallo's introduction refers to him as the "artist" with some inks by Don Rico, which implies that Winiarski likely at least partially inked the feature.

Genre
war
Characters
Sergeant Dix [Jeff Dix]; Fish Face Friday (a cook, introduction); Mrs. Dix (Jeff's mother); Joe Dix (Jeff's brother); the Japanese (villains, some die)
Synopsis
Corporal Jeff Dix's furlough is cut short and he is deployed to Panama. Now a Sergeant, he runs into his old friend Fish Face Friday who is the cook on the ship. While on their way to Panama they are attacked by the Japanese, one of whom runs afoul of Fish Face when he tries to poison the food in the galley.
Reprints

This feature was called "Corporal Dix" in the previous issue. The Masterworks edition lists writer and artist as unknown.

Genre
superhero
Characters
El Gaucho [Don Caldwell aka the American Avenger] (introduction, origin); Carelos Ramerez (Don's best friend); Baron Girbel (villain, introduction); The Baron (villain); the Nazis (villains)
Synopsis
Don Caldwell, an exchange student in South America, comes to love his new home and studies the legend of their protector El Gaucho, who died many years ago. An old man hears him speak of this, and gives him El Gaucho's costume to carry on the tradition. After defeating Nazis in South America, Don feels he must return to the U.S. to fight Nazis there, becoming the American Avenger.
Reprints

The cover of Atomic Comics #2 swiped from splash page of this story. Ink credit according to Doc Vassalo. The Masterworks edition also lists an unknown as an additional inker, but Vassallo's extended notes published online only mention Klein. In the published introduction, he mentions that Klein may have done background pencils.