On-sale date from 1969 Periodicals, Copyright Office, Library of Congress with a correction factor of plus 28 days.
This issue has variants:

Death Without Warning! (Table of Contents) 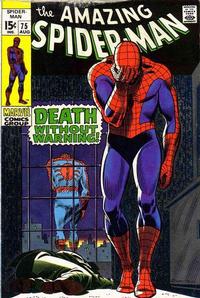 Death Without Warning! (Table of Contents: 2)

The Amazing Spider-Man
Genre
superhero
Characters
Spider-Man [Peter Parker]; Lizard [Dr. Connors]; Man-Mountain Marko; Silvermane (death); Caeser Cicero; Martha Connors; Billy Connors
Synopsis
Spider-Man, aware that Dr. Connors and his family are in danger from the Maggia, searches for them. The once-elderly Silvermane tries to convince Marko and Cicero that he is in fact a younger version of himself while Dr. Connors escapes and Spider-Man arrives. In the ensuing free-for-all Connors transforms into the Lizard and Silvermane just keeps getting younger.
Reprints

The Lizard is also in the next two issues.

First Line of Dialogue or Text
Dear Mr. Lee, It seems that ever since issue #39, Spider-Man has been getting weaker and weaker, not to mention much less agile.
Characters
Spider-Man [Peter Parker]