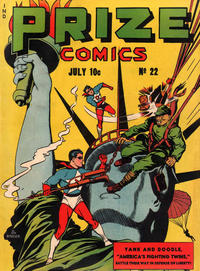 What You Can Do To Win the War (Table of Contents: 1)

Synopsis
suggestions for what boys and girls can do to contribute to America's war efforts.

black and white, with indicia, on inside front cover.

Characters
Yank and Doodle [Yank [Dick Walters]; Doodle [Rick Walters]]
Synopsis
Dick and Rick attend a circus with their father, and must intervene as Yank and Doodle to foil a murder attempt by a criminal ring, intent on taking over the circus. The boys' father suspects his sons' secret identities.

First Line of Dialogue or Text
An entire city in the deathly grip of a gang of invisible criminals
Genre
crime
Characters
Dr. Frost; Professor Gunther (intro); Craig Lehr (villain, intro)
Synopsis
A wave of bank robberies has police stumped, as no one has seen the crooks. Dr. Frost stumbles upon Professor Gunther, a scientist who has invented a ray gun which turns people temporarily invisible. He learns that Gunther's assistant Lehr has stolen the gun to turn commit the crimes. Frost must turn invisible himself to catch the villains.

First Line of Dialogue or Text
The Nazis are up to their tricks again!
Genre
war
Characters
Ted O'Neil
Synopsis
The Nazis have kidnapped the Turkish Aga's son, and framed the British for the crime in a bid to win Turkey to the German's side. It's up to British intelligence and the R.A.F. to recover the boy and expose the Nazis.

The Black Owl Outwits The Fox (Table of Contents: 5)

Genre
superhero
Characters
The Black Owl [Doug Danville]; The Fox (villain, intro); Terry Dane
Synopsis
The Fox wages a campaign of espionage and murder. The Black Owl must use his wits to track the Fox down and end his reign of terror. Under the Fox's mask, the Black Owl finds a Japanese spy.

Characters
Frankenstein; Bulldog [Denny Dunsan]; Dr. Devil (villain)
Synopsis
After his defeat by the Black Owl, Doctor Devil seeks revenge against humanity, and selects the perfect agent for his scheme, Frankenstein. Dr. Devil grants Frankenstein three wishes. For the first wish, Frankenstein summons Bulldog Denny in order to finish off his nemesis. Frankenstein soon learns that he has been tricked, and turns on Dr. Devil. The story ends with Frankenstein wounded, plunging in the fiery domain of Doctor Devil.

The General and the Corporal / comic story / 2 pages (report information)

First Line of Dialogue or Text
The S.S. Malibu noses into a port on the Australian coast
Genre
adventure
Characters
Spike Mason; Ford (Spike's friend)
Synopsis
Spike's buddy Ford takes an unauthorized shore leave, and gets lured into a trap, set by a beautiful agent working on the behalf of Japanese spies. The woman regrets her actions, and tips Spike off as to the where-abouts of his friend.

The Adventure With the Loop! (Table of Contents: 11)