...To Fight the Juggernaut! (Table of Contents) 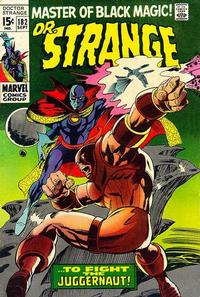 Palmer coloring credit per interview:
http://www.wtv-zone.com/silverager/interviews/palmer.shtml
Page 20, panel 4: Eternity changes Strange’s name to ‘Sanders.’ Although renamed ‘Stephen Sanders’ at the very end of this issue, this alias won’t last more than two episodes, this one included.

Batty Bulletins to Bewilder, Bewitch, and Bedazzle You! (Table of Contents: 2) (Expand) /

Includes a note by Roy Thomas on the inclusion of author Tom Wolfe in issue # 180 and his letter of comment.