Indexed from scanned copy at http://digitalcomicmuseum.com
This issue has variants:

Cover art is a redrawn version of the splash panel for the story inside. 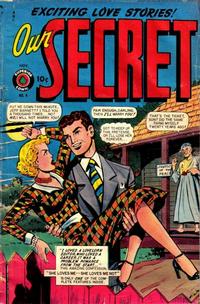 I Tried to Tame a Texan (Table of Contents: 1)

Genre
romance
Characters
Mary Roper; Sam; Randy Hilton; Mr. Roper; Hilda; Ronnie Featherston
Synopsis
Mary returns to her family ranch after attending school in the East. Her boyfriend Randy now seems rough and uncouth and Mary decides to break their engagement and leave. But when her father is injured, Mary must stay to run the ranch. Her city friend Ronnie arrives for a visit. Randy and Mary discover Ronnie is smuggling drugs across the border. Mary ropes Ronnie and turns him over to the sheriff, then marries Randy.
Keywords
drugs

Genre
romance
Characters
Carol Stone; Jeff Barnett; Tim
Synopsis
Jeff loves newspaper advice columnist Carol, but she refuses to marry him for “a few years,” preferring to establish herself in her career first. He breaks up with her, then writes an anonymous letter to the newspaper asking for her professional assistance. Carol’s reply is for him to abduct the woman he loves and force her to elope with him. Jeff takes Carol to a justice of the peace and they are wed. Then Carol admits she had actually let copy boy Tim write the reply to his letter!

Splash panel art was redrawn for the cover of this issue.

I Was Branded (Table of Contents: 4)

Genre
romance
Characters
Sally Gant; Judge; Roger Blackstone; Johnny Gant; Mr. Gant; Irma Blake
Synopsis
Sally is sent to prison for harbouring a fugitive, her younger brother Johnny. Johnny was killed in a shootout with the police after robbing a store, and Sally blames parole officer Roger. Upon her release, Sally visits her former cellmate Irma, who’s throwing a party with some “rough looking” friends. When the police raid the party, Roger helps Sally escape so she won’t go back to prison. He loses his job but will marry Sally and start life anew elsewhere.

I Never Had a Real Date! (Table of Contents: 5)

Genre
romance
Characters
Julie Trent; Dorothy Sanders; Grams Trent; Henry Taunton; Norma Taunton; Dr. George Murdock; Mabel; Gwen; Jinny
Synopsis
Department store clerk Julie never has a date. After dreaming of a handsome lover, she pretends he’s real and tells her friend she has a boyfriend named “George Dufrey.” One day she sees a man who looks just like “George” and asks him to pretend to be her boyfriend. His name is Henry and he goes along with the gag, but suggests Julie consult with psychiatrist George Murdock. Murdock advises Julie to have a makeover. Henry reveals that he was Julie’s classmate in school, and that he’s married. Julie falls in love with Dr. Murdock instead.
Keywords
psychiatrist