Originally intended to be published in 1981, this issue would not be released until August 2004. Available via mail order only from Comely. Limited, serially numbered, and signed edition by Richard Comely of only 150 copies. Sold for $20.00 Canadian and $15.00 U.S., plus $2.50 postage.
Indicia states: "Published June 2004 by Comely Communications Inc. Printed in Ontario, Canada. Captain Canuck was created by Richard Comely and Ron Leishman. Contents produced in 1980 in Calgary, Alberta. Cover art by Jean Claude St. Aubin (1980) Electronic colouring by Richard Comely (2004) The Stygian, Black Water and Gold City - are all illustrated by George Freeman (1980). Captain Canuck is a trademark owned by Richard Comely." 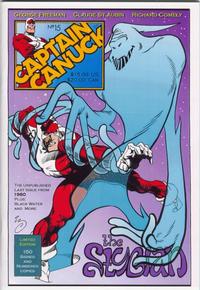