The Monster and the Man-God! (Table of Contents) 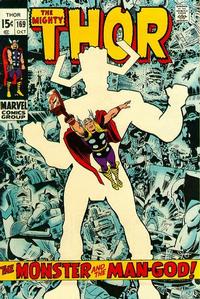 The Awesome Answer! (Table of Contents: 1)

The origin of Galactus concludes. First appearance of the World of Taa.

Possible Everett inks per Grant Windsor. Nick Caputo concurs and suspects Klein may have begun inking some of those pages but since this was his final work before his untimely death in September, 1969, Everett may have been called in to complete the job.