Per Jerry Robinson, he penciled and inked the Batman and Robin figures while Kirby and Simon drew the rest of the cover. Information per Harry Mendryk via the Jack Kirby Museum (http://kirbymuseum.org/blogs/simonandkirby/archives/1465). 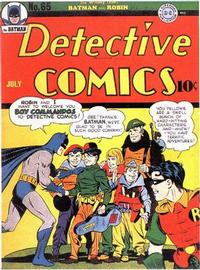 The Lost Caravan by Waldo Fleming (Table of Contents: 2)

Inside front cover. The book "The Lost Caravan" by Waldo Fleming is reviewed.

The Cop Who Hated the Batman! (Table of Contents: 3)

The trademark submission was for the logo design that started in this issue. The first appearance in the last issue has a different design. Also, this trademark is not the same trademark that was granted for the logo that would eventually become the cover logo for Boy Commandos (DC, 1942 series) #1 (Winter 1942-1943) (details found on the ashcan, Boy Commandos Comics [ashcan] (DC, 1942 series) #1 (September-October 1942)).

No More Ghosts (Table of Contents: 13)

The Machine Man (Table of Contents: 14)

Mystery of the Priceless Pooch (Table of Contents: 17)

The Tootsie Roll of Honor (Table of Contents: 20) (Expand) /