Trouble in Bavaria (Table of Contents) 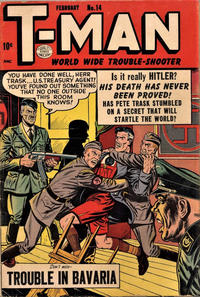 Ultimatum of Doom! (Table of Contents: 1)

The Case of the Merry Murderer (Table of Contents: 2)

Genre
crime
Characters
Philip Jarrett (millionaire, counterfeiter); Ken Messing (investigator); Tod Ellis (T-man)
Synopsis
A man posing as Jarrett is supposed to conduct a private war of vengeance against a counterfeit mob. The false Jarrett is in fact the head of the counterfeiters.

Faces in sideview with pouchy eyes are similar to Sultan's credited work in Adventures Into the Unknown #25 and #16.

Trouble in Bavaria (Table of Contents: 3)

The Killer Who Wasn't There (Table of Contents: 4)