Propaganda for Doom (Table of Contents) 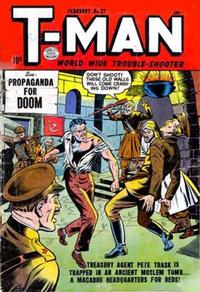 The art here is much like STeinberg's credited stories in T-Man #17. Some bony faces could be Certa on ink.

Genre
crime
Characters
T-Man Don Miller; Comrade Jennings (villain)
Synopsis
If the undercover T-Man did not report a sabotage by his red "comrades", an all-important government tank plant would be blown up.

Some faces in profile with typical pouch under the eyes point to Sultan, who had pencil work for Quality Comics at this time.

Propaganda for Doom (Table of Contents: 5)

The Ill Wind (Table of Contents: 6)