This scene does not correspond with any actual Little Archie story; it's just a generic "action hero" pose for Little Archie. 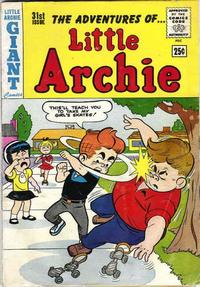 Attack of the Ice Mice (Table of Contents: 2)

Genre
adventure; humor; fantasy-supernatural; children
Characters
Little Archie Andrews; Mad Doctor Doom; Chester Punkett; Little Jughead Jones; Little Moose Mason; un-named Captain; un-named sailor; un-named driver
Synopsis
In Mad Doctor Doom's latest plan for world domination, he gets the help of the Ice Mice, a rare group of Arctic mice whose frozen breath can form a wall of ice that's thick enough to stop any bullet. He and Chester bring the mice to Riverdale, and try to use them to steal the Rare Ruby Rooster from the Humble Home Bank. But fate once again intervenes to put Little Archie in Doom's way: when Chester steals a silver fox tail from a bike to spruce up his car, that bike belongs to Little Archie's pal Jughead.
Reprints

The newspaper story about the Rare Ruby Rooster mentions the "outbreak of the Prune Fungus." The nonexistent disease "Prune Fungus" is a recurring gag in Bolling's stories.

Flight of the Penny Black (Table of Contents: 3)

Genre
humor; children
Characters
Little Archie Andrews; Fred Andrews; Little Jughead Jones; Little Moose Mason
Synopsis
When Fred is looking over his stamp collection, an antique envelope with a rare "Penny Black" stamp is carried out the window by a strong wind. The boys put the envelope on Little Archie's model plane, and the "capricious" spring breeze keeps the plane in the air despite Fred's efforts to get it down.
Reprints

An example of Bolling's mystical side: a slapstick story is given a fantasy twist through captions and images that seem to suggest that the wind has a mind of its own.

Two of Bolling's own hobbies, stamp collecting and model planes, are referred to in this story.

The Missing Mouse (Table of Contents: 4)

A Friend In Deed (Table of Contents: 5)

Genre
adventure; children
Characters
Little Archie Andrews; Spotty; Fred Andrews; Mary Andrews; Al; George
Synopsis
To avoid getting a bath, Spotty runs off without his collar and is captured by dogcatchers. To get back to Little Archie, Spotty tries to make a seemingly-impossible escape from the dog pound.

Never Too Old (Table of Contents: 6)

The Texas Longhorn (Table of Contents: 7)

A Top Story (Table of Contents: 8)

One of the first examples of Taylor making the kids act more like their teenage counterparts, with Archie being romantically interested in Veronica as in the "big" Archie comics. Taylor told Gary Brown (in Comic Book Artist, March 2004) that this was in response to requests from the editors: "They wanted a love interest like the Archie characters. You know, Betty likes Archie, but he always goes for Veronica. That's what they wanted. I mean, the editor said, I know little boys don't necessarily like little girls, but the readers want that."

Grooming Your Dog (Table of Contents: 10)

The Lucky Coin (Table of Contents: 11)

Genre
adventure; children
Characters
Little Archie Andrews; Little Jughead Jones; Major; Ringer; un-named adults
Synopsis
At the circus, Little Archie's wallet is stolen and with it, his lucky coin. He and Jughead discover that the pickpocket actually works for the owner of the circus.
Reprints
Keywords
circus