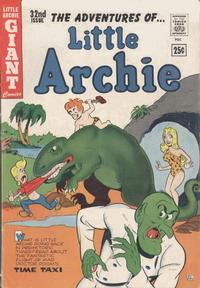 Genre
adventure; humor; children
Characters
Little Archie Andrews; Little Jughead Jones; Smedlington Smythe; un-named boater
Synopsis
An unusually intelligent gorilla, bound for the Riverdale zoo, escapes from his cage while being unloaded from the "Pride of Walvis Bay." The next day, the gorilla comes upon Little Archie and Jughead in their treehouse, and chases Little Archie through the woods, across the rocks of Carson's Creek, and finally out into the ocean on a rolling log.
Reprints

The events of this story happen concurrently with those of the following story, "Time Taxi."

The newspaper headline at the end includes another of Bolling's references to the "Prune Fungus."

Genre
adventure; humor; children; fantasy-supernatural
Characters
Mad Doctor Doom; Chester Punkett; Little Archie Andrews; Mary Andrews; Smedlington Smythe; Cap'n Moon; unnamed Egyptian
Synopsis
When the gorilla escapes from the "Pride of Walvis Bay," Mad Doctor Doom and Chester take advantage of the commotion to jump ship again and head back to Crackstone Manor. Realizing that fate has decreed that Little Archie will always foil his plans for world domination, Mad Doctor Doom builds a time machine to take him and Chester back to B.L.A. (Before Little Archie) so they can take over the world without interference. But no matter where or when they go, an ancestor of Little Archie is there to stand in their way.
Reprints

The events of this story happen concurrently with the preceding story, "Gorilla." Doom and Chester escape from the ship as the events of "Gorilla" begin, and meet up with Little Archie just after "Gorilla" ends.

In his interview with Gary Brown (Comic Book Artist, March 2004), Bob Bolling called this "one of my favorite stories."

Mystery of the Old Boathouse (Table of Contents: 4)

Genre
adventure; humor; children; detective-mystery
Characters
Little Betty Cooper; Little Veronica Lodge; Susan Johnson; un-named camp director; un-named crooks
Synopsis
Betty and Veronica go to Silver Lake Camp, near the site of a recent rash of bank robberies. Betty thinks she notices someone hiding out in the old abandoned boathouse near the camp. She goes to investigate and is captured by the bank robbers. Veronica then goes looking for Betty.
Reprints

Far Out Prize (Table of Contents: 5)

A Quiet Weekend In the Country (Table of Contents: 7)

Genre
adventure; humor; children; science fiction
Characters
Little Archie Andrews; Zeena; un-named Globs; un-named Zentroxians
Synopsis
In another solar system, the planet Zentrox dominates the tourism industry. The planet Glob, full of ugly, superstitious creatures who worship a stone god named "Hob-Glob," plans to invade and take over Zentrox. Zeena, the beautiful daughter of Zentrox's president, is out for a joyride when a glob ship shoots her down and she crash-lands near the farm where Little Archie is staying with his grandmother. Zeena and Little Archie are both captured and taken as prisoners to Glob, where they overhear the plan to launch the final invasion of Zeena's planet.

Zeena appears to be partly a parody of Lynda Bird Johnson, the first daughter at the time.

Treasure of the Deep (Table of Contents: 10)

Genre
adventure; humor; children
Characters
Little Archie Andrews; Little Betty Cooper; Chick Cooper; Susan Johnson
Synopsis
In 1861, the ship "Atlanta" sank to the bottom of the ocean, carrying with it a fortune in coins. In 1964, Little Archie, his babysitter Susan, and Betty's brother Chick discover the lost ship and its treasure while diving, but they also discover that they are threatened by sharks.
Reprints