When Walks... the Mandroid! (Table of Contents) 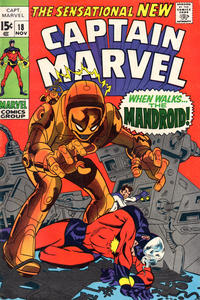 Vengeance Is Mine! (Table of Contents: 1)

Genre
superhero
Characters
Captain Marvel [Mar-Vell]; Carol Danvers; Yon-Rogg (Villain); The Mandroid (Villain); Una (Flashback cameo); Rick Jones; Trina; Blackie; Mordecai P. Boggs
Synopsis
Rick Jones copes with being Mar-Vell's Earth host and Captain Marvel battles Yon-Rogg and The Mandroid who have kidnapped Carol Danvers at an old Kree outpost. During the battle, Yon-Rogg shoots Carol with a laser which causes her to fall unconscious beneath the damaged Kree Psyche-Magnitron. Captain Marvel rescues her (but not before the Magnitron alters her genetically, allowing for her to gain the powers she will later use as Ms. Marvel).
Reprints

As revealed in the letters page of issue #20, John Romita drew the last two panels on page 20.

Possible Robinson coloring credit per info in the letters section of Incredible Hulk #125.

The letters section includes a note explaining that John Buscema stepped in to finish the artwork on this story. Letters of comment from Jim Wilson, Dennis Cashen, and Carrie Mather and Barbara Ertter.