First Line of Dialogue or Text
Bingo, I did it!
Genre
humor
Characters
Uncle Herman; Bingo Wilkin; Samantha Smythe
Synopsis
Scene based on the story "Inventing We Will Go."

Art identifiable as Dan DeCarlo by his style. Inking style seems to be that of Lapick, DeCarlo's regular inker at the time. 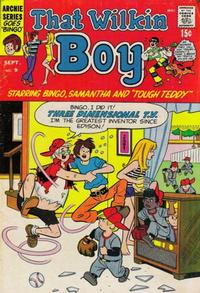 Inventing We Will Go.. (Table of Contents: 1)

This is a remake of a story from Jughead # 62 (July 1960), "Dimension Invention." It uses the same script almost word-for-word, and even uses the same name, Herman, for Jughead and Bingo's uncles.

Though Samantha appears in the story, she has no lines, because the script this is based on had only two characters (Jughead and Uncle Herman), and all their lines go to Bingo and Uncle Herman, respectively.

This is the first appearance of Bingo's Uncle Herman. His design is completely different from Jughead's uncle of the same name, though in later comics, this Uncle Herman would become Jughead's as well (thus making Bingo and Jughead into cousins).

Along Came Bingo (Table of Contents: 3)

Script identifiable as Frank Doyle by his distinctive style and word choices (like "W-ell" and "Eep!").

When reprinted in Jughead's Double Digest Magazine (Archie, 1989 series) #194, writing is credited to Dick Malmgren and inking to Jim DeCarlo.

The Master Stroke (Table of Contents: 4)

Bingo Tells It Like It Is! (Table of Contents: 5)

Love Thy Neighbor (Table of Contents: 6)