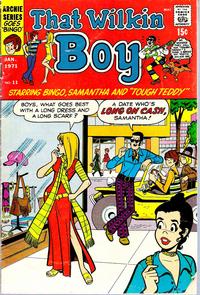 The Vicious Cycle (Table of Contents: 1)

A Day in the Life of a Fool (Table of Contents: 4)

In the splash panel, Rebel is reading the collected poems of John Keats.

The Beat Goes On (Table of Contents: 5)

Bingo Tells It Like It Is (Table of Contents: 6)

The Old Pro (Table of Contents: 7)

This story reveals that Herman is the brother of Bingo's mother, and therefore, as Willie says, "he is not -- I repeat, not a Wilkin!"

Credits confirmed by the printed credits in Jughead Double Digest #181.