Who Do You Trust? (Table of Contents) 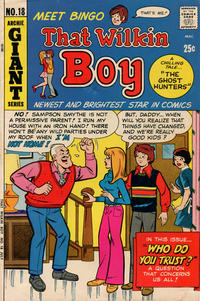 The Ghost Hunters (Table of Contents: 1)

Genre
humor; detective-mystery; teen
Characters
Bingo Wilkin; Samantha Smythe; Teddy
Synopsis
Bingo, Samantha and Teddy go to a ski lodge that has few customers because everyone thinks the house next door is haunted. The intrepid trio decides to find out what's causing the spooky noises in the house.
Reprints

Can You Top That? (Table of Contents: 2)

Bingo and Samantha Tells It Like It Is! (Table of Contents: 3)

Who Do You Trust (Table of Contents: 4)

Genre
humor; teen
Characters
Bingo Wilkin; Samantha Smythe; Sampson Smythe; Sheila Smythe
Synopsis
Mr. Smythe, decrying the current trend toward permissiveness, warns Samantha not to start any wild parties in his house while he's away. Soon after he leaves, a school bus full of young children breaks down in front of the house, and Samantha lets the kids in while it's being repaired.
Reprints

Credits changed based on the credits from Jughead's Double Digest (Archie, 1989 series) #189.

Heartache Is a Two-Way Street (Table of Contents: 7)

Genre
romance; teen
Characters
Bingo Wilkin; Samantha Smythe; Sally; Sampson Smythe; Sheila Smythe
Synopsis
In a story narrated by Samantha, she takes Bingo for granted, running around with many exciting boys and keeping Bingo on a leash for when she needs him. When Bingo gets tired of this treatment, Samantha fixes him up with her plain friend Sally, who can keep him occupied without being a threat to Samantha. But Samantha's fast-living boyfriends let her down when she needs a date for the biggest dance of the year, and when she turns to Bingo, he unwittingly gives her a taste of her own medicine.
Reprints

One of several Archie Comics stories from this period that are done in the style of romance comics, with flowery first-person narration.

It has been speculated that this might have been an unused Betty and Veronica script repurposed for "That Wilkin Boy." Samantha acts almost exactly like Veronica in this story, and Sally, a character who never appeared again, is similar to Betty.