My Selfish Heart (Table of Contents) 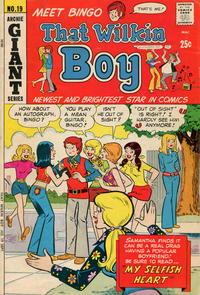 My Selfish Heart (Table of Contents: 1)

Genre
teen
Characters
Bingo Wilkin; Samantha Smythe; Buddy Drumhead; Tough Teddy; Sampson Smythe; Sheila Smythe; Uncle Herman
Synopsis
Samantha narrates the story of how she felt Bingo wasn't paying enough attention to her and started to transfer her affections to Teddy, only to find that Teddy was a cad.
Reprints

A Moving Scene (Table of Contents: 5)

Genre
teen
Characters
Bingo Wilkin; Samantha Smythe; Willie Wilkin; Sampson Smythe; Sheila Smythe
Synopsis
Mr. Smythe becomes furious when he learns that a Japanese-American family is moving into the neighborhood, and starts a petition to get them kicked out.
Reprints

This was one of a number of serious, issue-oriented stories the title did in the early '70s, turning Mr. Smythe into a sort of Archie Bunker character. Smythe even uses racist epithets to describe the neighbors, and other characters refer to him as a "bigot."

Art identifiable as Gus LeMoine due to the style (see http://www.toonopedia.com/fastwill.htm)

Script identifiable as Dick Malmgren due to his distinctive writing style.

Genre
teen
Characters
Samantha Smythe; Sampson Smythe; Uncle Herman Wilkin; Willie Wilkin
Synopsis
Uncle Herman claims to have a date, but Willie and Mr. Smythe follow him and discover that he's actually following a pretty nurse home from work without having the nerve to talk to her.
Reprints