Josie, Melody and Pepper had been created by Dan DeCarlo for a proposed newspaper strip called "Here's Josie." when it didn't sell as a strip, he took the characters to Archie Comics and got the go-ahead to do it as a comic book.

Using the three girls as the foundation for the new comic, DeCarlo developed the characters and their supporting cast in conjunction with writer Frank Doyle. DeCarlo told TheTrades.com in 2001 that "I designed all the characters, and Frank Doyle was doing all the writing."
This issue has variants: 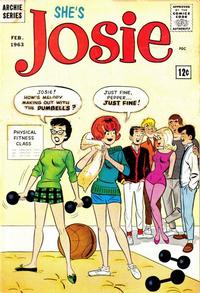 A Gym Dandy (Table of Contents: 1)

Genre
teen; humor
Characters
Josie; Melody; Pepper; Alexander Cabot III
Synopsis
Melody has been banned from physical fitness class because her physique drives the boys crazy, but the wealthy Alex Cabot III takes Josie and Pepper to work out at the private gymnasium in his mansion.
Reprints

The four stories in this issue form an issue-length story arc. Most of the early issues of this comic tried to distinguish themselves from the regular Archie brand by telling book-length stories or giving some larger theme to the linked stories in the issue.

Genre
teen; humor
Characters
Josie; Pepper; Mr. Jones; Albert; Sock
Synopsis
Josie and Pepper try to get the boys to participate in the nationwide physical fitness program, starting by getting Albert and Sock to clean out Josie's dad's garage.
Reprints

The introduction of Sock, the big brawny guy with a crush on Pepper. He started out as very similar to Moose, but later became more intelligent and sensitive.

One of many 1962-3 Archie stories that refer to President Kennedy's call for the youth of America to get more physically fit.

Genre
teen; humor
Characters
Josie; Pepper; Albert; Sock; Alexander Cabot III
Synopsis
The boys may not want to exercise, but they sure go in for a lot of physical exertion, including wild dancing and fighting.
Reprints

Track Down (Table of Contents: 4)

Genre
teen; humor
Characters
Josie; Melody; Pepper; Mr. Tuttle; Albert
Synopsis
Josie and Pepper still can't get the boys interested in exercise, but when Melody starts running along the track in her shorts, they all get plenty of exercise by running after her.
Reprints

In the final panel, the shortest of the boys running after Melody is a caricature of Dan DeCarlo. Self-caricatures of DeCarlo would become a running gag in many of the pre-Pussycats "Josie" issues.