First Line of Dialogue or Text
Do you think Albert will guess that his birthday present is a guitar?
Genre
humor
Characters
Josie; Melody; Pepper

The cover is the same as the comic's splash page, re-colored and re-lettered. 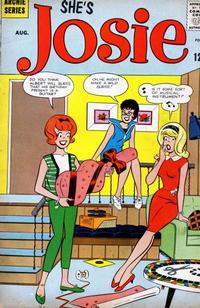 Genre
humor
Characters
Josie; Melody; Pepper; Albert; Alexander Cabot III; Albert's father
Synopsis
Josie gives Albert a guitar for his birthday. He immediately spends all his time making up songs, playing and singing, and cares more for the guitar than for her.
Reprints

Part one of a four-part story.

No credits, but the art appears to be by DeCarlo.

Script identifiable as Doyle by the style and DeCarlo's statement that Doyle did "all the writing" for the early Josie comics.

Genre
humor
Characters
Josie; Alexander Cabot III; Alexandra Cabot; Jerkly
Synopsis
Alex tries to show Josie that he can play the guitar and sing better than Albert. Meanwhile, his sister Alexandra, who has a crush on Albert, decides to make a play for that "penniless waif."
Reprints

Genre
humor
Characters
Josie; Melody; Pepper; Albert; Alexandra Cabot
Synopsis
Alexandra tries to get Albert away from Josie by buying him a Beatles-style wardrobe and hairdo, and launching him as a potential folk singing star.
Reprints

The Song Is Ended (Chapter Four) (Table of Contents: 6)

Genre
humor
Characters
Josie; Melody; Pepper; Albert; un-named thugs
Synopsis
Josie is in despair because Albert still cares more about his guitar than her, but then she discovers that his guitar can be helpful to her, too.
Reprints