This issue is the last appearance of Pepper, who had been part of "Josie" since the beginning and was one of the three characters that Dan DeCarlo originally submitted to Archie Comics (along with Josie and Melody).

DeCarlo claimed in an interview in The Comics Journal that Pepper was dropped because the publishers considered her too similar to student protesters and activists.

This is also the last "Josie" appearance of Clyde Didit, though a character of the same name (but completely different design) became part of the Madhouse Glads series. 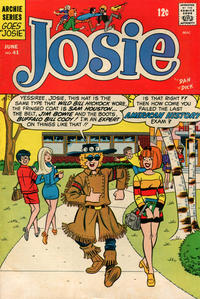 Song of Love (Table of Contents: 1)

Genre
humor; teen
Characters
Josie; Melody; Pepper; Clyde Didit; Sock; Alexander Cabot III; Alexander Cabot II; Alexandra Cabot
Synopsis
Alex pays Clyde Didit to write and perform a song that will help him get Josie. Clyde writes a song making fun of Alex's conceit, but Alex considers it a tribute to his own wonderfulness, and uses all his money and influence to turn the song into a hit. Josie begins to feel upset that Alex is more interested in listening to a song about himself than chasing after her, while Alexandra fears that if Clyde gets rich off the song, she won't have a chance to attract him with her money.
Reprints