The first Josie issue without Pepper.

As Pepper vanishes, another character arrives: this issue is the first appearance of Alan M.

This issue is also the last appearance of Pepper's boyfriend, Sock, who has almost nothing to do without her, and was also never mentioned again after being written out.

This was the first issue to introduce the "band" concept popularized by the Archie cartoon series, though in this story, the band is an all-male one (much like the Archie band in the comics was originally only Archie, Jughead and Reggie). A few months later, the company hit on the idea of putting Josie in a band instead, and the rest was history.

First Line of Dialogue or Text
Is that the boy you're going to ask to the dance?
Genre
teen; humor
Characters
Josie; Alan M.; un-named girl 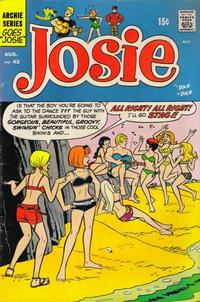 Josie's last name, which was "Jones" since the beginning of the comic, becomes "James" in this story. In subsequent years it would go back and forth between "James," "Jones" and "McCoy." All the "Josie" sequences in this issue are part of one continuously paginated story but are not marked as chapters or parts.

Gloomer and Instant Replay are presented as possible recurring characters, but they didn't last beyond this issue.

Jumping to a Conclusion (Table of Contents: 5)