The Killer Costume or the Ultra Uniform? (Table of Contents) 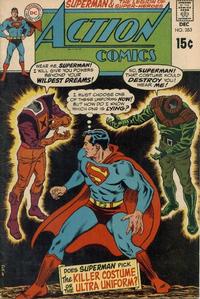 The Killer Costume! (Table of Contents: 1)

Job Number
W-370
Genre
superhero
Characters
Superman [also appears as Clark Kent]; Aabur-Z; Enforcer NS-II; Jackson Randell [Destroyer]; Perry White; Lois Lane; "Willie the Dip" Morgan; Benny Foran; "Chick" Dennison
Synopsis
Aabur-Z is an interplanetary criminal being transported to prison by Enforcer NS-II. Their ship is destroyed but their costumes remain alive due to their willpower and the strange radiation of a comet. Aabur's costume arrives on Earth first and seeks a criminal to possess, but then both costumes are drawn to Superman.
Reprints

Job Number
K-256
First Line of Dialogue or Text
The siren! Someone escaped!
Genre
humor
Characters
Warden Willis; Prisoner 7416; prison guard
Synopsis
A prisoner is attempting an escape but Warden Willis, knowing the prisoner was a vaudeville actor, traps him in a spotlight.
Reprints

Job Number
W-365
Genre
superhero
Characters
Legion of Super-Heroes [Chameleon Boy [also as Dane Roberts]; Princess Projectra; Karate Kid]; Janice Warren
Synopsis
Chameleon Boy escorts Princess Projectra to a party and meets her friend Janice. Since Janice is repelled by Chameleon Boy's appearance, he disguises himself as Dane to get to know her. But when one of her jewels goes missing, "Dane" becomes a suspect.
Reprints