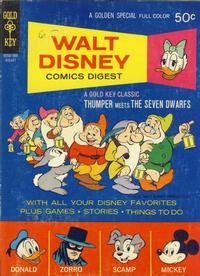 Table of Contents and indicia.

The Heat Beaters (Table of Contents: 5)

First Line of Dialogue or Text
Find the number of steps that Peter must take in order to reach the pirate gold!
Genre
children; fantasy-supernatural
Characters
Peter Pan

The House Hunt (Table of Contents: 11)

First Line of Dialogue or Text
The names of four musical instruments are hidden in Jiminy's letter! Can you find them all?
Genre
anthropomorphic-funny animals
Characters
Jiminy Cricket

A New Adventure for Johnny Appleseed (Table of Contents: 14)

The Magic of Make-up (Table of Contents: 15)

The Monkey Trap (Table of Contents: 16)

The Pumpkin Plot (Table of Contents: 18)

The Watchful Parent (Table of Contents: 21)

First Line of Dialogue or Text
Donald is a member of the Duckburg Watchful Parents Club!
Feature Logo

Walt Disney Donald Duck [Carl Barks Dell Comics Logo with rounded k]
Genre
anthropomorphic-funny animals; humor
Characters
Donald Duck; Huey; Dewey; Louie; members of the Watchful Parents Club; natives of the Auca tribe
Synopsis
Members of the Duckburg Watchful Parents Club urge Donald to "keep an eye on [his nephews'] safety" while in South America on business for Uncle Scrooge. In Ecuador, the boys fall over a cliff after trying to rescue Donald, who had already climbed partly down the cliff and losing his footing. This results with them all falling down into the river below. Later they find a rubber raft and then spend their time trying to get back to civilization and safety. But, through all this, "who has kept an eye on who"?
Reprints
Keywords
carelessness; crocodiles; Ecuador; exaggerating one’s importance; jungle setting; natives; series of mishaps; South America; title or logo modification; Watchful Parents Club

The title, "The Watchful Parent" was given to this story by Western Publishing for its first American reprint in this issue and would qualify as its "official title" originating, as it does, with Western's editorial processes.

First Line of Dialogue or Text
Fill in the correct missing letters and the words will be the same across and down!
Characters
Madam Mim; mouse
Keywords
crossword puzzle