The Immortal Superman! (Table of Contents) 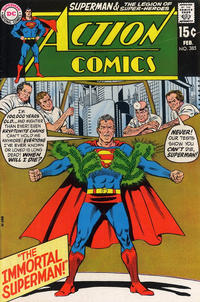 The Immortal Superman! (Table of Contents: 1)

Job Number
W-400
Genre
superhero
Characters
Superman [also appears as Clark Kent]; President Richard M. Nixon; The Time-Trapper; the Multiple-Men; Superman Gang
Synopsis
After promising the President not to travel through the time-barrier using his powers, Superman must use a defective Legion time bubble to answer a call for help from the future. When he arrives in the year 101970 he finds that he has aged a hundred thousand years, and that he is unable to return to his own time because the Time-Trapper has secretly blocked the way.
Reprints
Keywords
aging; Green Kryptonite; time travel

The Fallen Starboy! (Table of Contents: 3)