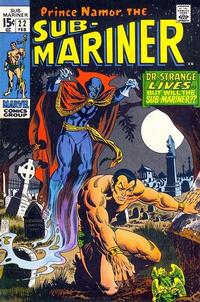 The Monarch and the Mystic! (Table of Contents: 1)

First Line of Dialogue or Text
This is the hour that I have longed for, these dark days past!
Feature Logo
Prince Namor, the Sub-Mariner
Genre
superhero
Characters
Sub-Mariner [Namor]; Lady Dorma; Ikthon; Vashti; Doctor Strange [Stephen Strange]; Nameless One (villain; introduction); Undying Ones; Joella Ward; Kenneth Ward (in flashback)
Synopsis
While Namor is being cured of his inability to breath under water, Dr. Strange implants information in his unconscious mind that leads him to Boston and the Idol of the Undying Ones.
Reprints