--Slaves of the Star-Spawn! (Table of Contents)

Neal Adams is credited with pencils (with touch-ups by Marie Severin) in The Official Marvel Index to the X-Men (Olshevsky 1987). 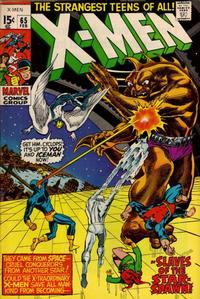 First Line of Dialogue or Text
Well... finally!
Genre
superhero
Characters
X-Men [Professor X [Charles Xavier]; Cyclops [Scott Summers]; Marvel Girl [Jean Grey]; Angel [Warren Worthington III]; Iceman [Bobby Drake]; Beast [Hank McCoy]]; Polaris [Lorna Dane]; Havok [Alex Summers]; Fantastic Four [Human Torch [Johnny Storm]; Crystal; Mister Fantastic [Reed Richards]; Thing [Ben Grimm]] (cameos); Colonel Nick Fury (cameo, voice only); S.H.I.E.L.D. (cameos); Z'Nox (introduction, villains); Changeling [Kevin Sidney] (cameo flashback)
Synopsis
The X-Men make it back to the mansion after their harrowing battle with Magneto only to be commanded inside by Alex and Lorna. They learn that earth is about to be attacked by the alien Z'Nox but a plan has been made to counter the invasion--a plan formulated by none other than the "dead" Professor X. Xavier returns to his charges and explains that Changeling was masquerading as him when he was killed. The X-Men board the Z'Nox space ship and attack but it is the collective power of happy thoughts funneled through Xavier into his students that ultimately drives the aliens off.
Reprints
Keywords
gravity transformer drive

The alien watchdog on page 12 was redrawn by Marie Severin to a more humanoid look, although references to the creature looking dog like were retained.