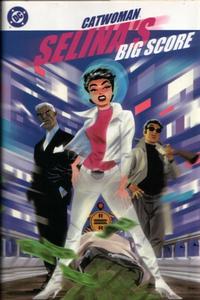 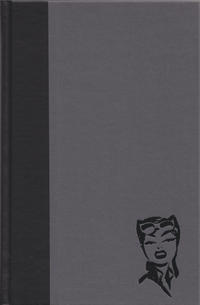 Title page with credits on reverse

Book One: Selina (Table of Contents: 2)

First Line of Dialogue or Text
I suppose I should start with the fact that I'm dead.
Genre
crime; superhero
Characters
Catwoman [Selina Kyle]; Leonard "Swifty" Burgess; Chantel; Frank Falcone; Stark (introduction; in flashback); Kong (Falcone's henchman)
Synopsis
After a job in Morocco doesn't pan out, Selina returns to Gotham to find a big score. A colleague, Swifty, puts her in touch with Chantel, the companion of local mob boss Frank Falcone. Chantel overhead Falcone talking about a heroin deal with Canadian criminals. The deal involves 24 million dollars in dirty money transported via train to Canada. Selina decides the heist is attractive, but too big for a solo job. She decides to put together a team.
Reprints
Keywords
Gotham City; Morocco; Swifty's Pawn Shop

Both Catwoman and Selina Kyle are generally believed to be dead at the time of this story. Catwoman appears primarily as Selina Kyle.

This chapter takes place shortly before the events of the "Trail of the Catwoman" story in Detective Comics (DC, 1937 series) #759-762.

Frank Falcone is stated to be a member of the Falcone crime family, but his exact relationship to the family is unspecified.

First Line of Dialogue or Text
They say that Miami is full of old people and gangsters.
Genre
crime; superhero
Characters
Stark; Catwoman [Selina Kyle]; Leonard "Swifty" Burgess; Chantel; Jeff; Frank Falcone
Synopsis
Selina meets up with her old mentor Stark in Miami and convinces him join her on the heist. Chantel acquires the train route and schedule. Selina learns that Slam Bradley has been investigating her death. Selina meets Stark in Vegas, where he introduces her to Jeff. Jeff is recruited and comes up with a means to board the train. Selina proposes a plan to get off the train with the money. Falcone learns that Chantel has been spying on him and confronts her.
Reprints
Keywords
Bradley Investigations; casino; Death Valley; Gotham City; hotel; Lake Tahoe; Las Vegas; Miami Beach; Swifty's Pawn Shop

First Line of Dialogue or Text
It was a dark and stormy night.
Genre
crime; superhero
Characters
Slam Bradley; Catwoman [Selina Kyle]; Leonard "Swifty" Burgess; Chantel (dies); Frank Falcone; Henri LaPerier; jean-Marc; Jeff; Stark
Synopsis
Slam Bradley is trying to figure out what Selina is up to. He stakes out Swifty's Pawn Shop, and spots and identifies Chantel. Selina and Swifty get away. Slam decides to track down Chantel to see if she's connected. He finds her as Falcone is about to kill her, having tortured the heist plans from her. Slam kills Falcone's men, then beats Falcone till he learns what Falcone knows of the heist, and that Falcone has tipped off the train and the Canadian heroin dealer, LaPerier. He talks a sea plane pilot into flying him to the border. Meanwhile, LaPerier intercepts Swifty at the border.
Reprints
Keywords
boat; diamond robbery; Gotham City; heist; sea plane; Swifty's Pawn Shop; train; train robbery

First Line of Dialogue or Text
All the planning, all the setup, is behind us.
Genre
crime; superhero
Characters
Catwoman [Selina Kyle]; Stark (dies); Jeff (dies); Kong; Leonard "Swifty" Burgess (dies); Henri LaPerier (dies); Slam Bradley; Jean-Marc (dies)
Synopsis
Selina, Stark, and Jeff board the train, take out the guards, and escape the train with the money. Swifty picks them up, but unknown to them LaPerier is on the boat with Swifty. LaPerier kills Jeff and then Swifty. Slam's plane buzzes the boat before LaPerier can kill Selina or Stark, who use the distraction to escape. LaPerier turns the boat back to the cove where Jean-Marc is waiting as the plane lands there. Jean-Marc kills the pilot, but is killed by Slam. Selina and Starkreboard the boat and confront LaPerier. Stark and LaPerier kill each other. Selina gets away with the score.
Reprints
Keywords
boat; border; heist; sea plane; St. Laurence River; train; train robbery