Cover has artwork under a black tone that is used on the cover to help signify that this is A Siege of Darkness crossover issue. 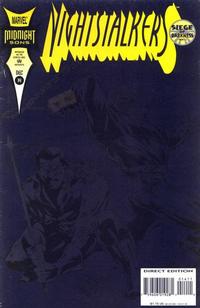 Siege of Darkness Part One: The Storm Before the Storm (Table of Contents: 1)

Genre
horror-suspense; superhero
Characters
Nightstalkers [Blade; Hannibal King; Frank Drake]; John Blaze; Morbius; Ghost Rider [Dan Ketch]; Professor Louise Hastings; Victoria Montesi; Sam; Bad Timing; Jinx; Modred; Lilith
Synopsis
John Blaze and the Ghost Rider summon the rest of the Nine to tell them that they have defeated Lilith. The Nightstalkers will not accept this without proof, and when they go to look for it they instead find a strange mist that is eating people. They also run into Bad Timing and other demons. Bad Timing gets away and John and Ghost Rider realize that Lilith is not dead. The Nine (plus Jinx and Modred) break up into two groups and go looking for Lilith.

Part one of seventeen.