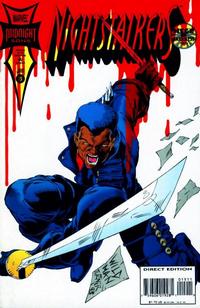 Genre
horror-suspense; superhero
Characters
Nighstalkers [Blade; Hannibal King; Frank Drake]; John Blaze; Ghost Rider [Dan Ketch]; Morbius; Blackout; Dr. Strange; Vengeance; Zarathos; Caretaker; The Fallen; "Linda Blair" (Frank's gun)
Synopsis
The Nightstalkers think they've won when the Lilin are pulled back into their own dimension, but Dr. Strange tells them that Zarathos and The Fallen are an even bigger threat. The Nightstalkers are tired of cleaning up after The Nine's screw-ups and leave, which allows Zarathos to beat John Blaze, Ghost Rider, Vengeance and Dr. Strange. He then takes Caretaker underground and the Nightstalkers go after him. In a pitched battle, Frank Drake overloads "Linda" and blows up one of the underground caverns with him in it. Hannibal King goes to get the others for help and Blade goes back after Frank.